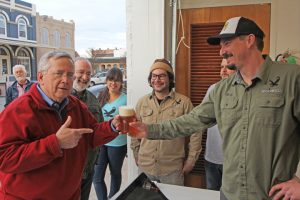 Lockhart Mayor Lew White, left, approached the Downtown Lockhart Business Association in fall 2017 about taking over this year’s edition of the Sip and Stroll event. which will commence at 1 p.m. Saturday, April 7. Here, White buys the first beer ever sold by Mike Mann’s Caracara Brewing Company, which just held its soft opening on March 31. Caracara is the official beer of the Sip and Stroll. Miles Smith/LPR

Just months ago, in fall 2017, Lockhart Mayor Lew White approached the Downtown Lockhart Business Association and asked if it would take the reins of the annual Sip and Stroll event geared toward wine and art lovers.
The organization agreed. Fast forward to April, and the event is preparing to kick off Saturday at 1 p.m., promising to cater to a wider – and younger – demographic.
The event’s new coordinators say the main objective is to encourage people to explore Lockhart.
“It’s just had new life breathed into it,” said Taylor Burge, co-owner of Chaparral Coffee and event coordinator. “It had run out of steam, which happens with any event if it’s been around long enough.”
New life, indeed. The event has undergone quite a few changes since the 2017 edition.
Read more in this week’s Post-Register, which includes a map of the Sip and Stroll.