A BANNER YEAR? Lockhart EDC director says 2018 could be best yet 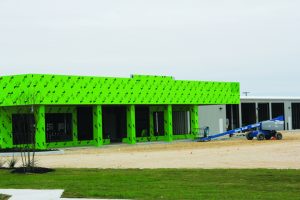 Miles Smith / POST-REGISTER
A grand opening in the first quarter of 2018 is projected for Lockhart’s new Benny Boyd automobile dealership.

As a new year begins, Lockhart Economic Development Corporation Director Rob Tobias thinks great things could be in store for the Caldwell County seat.
“I think 2018 will be the best year we’ve ever seen in Lockhart,” Tobias said. “I think it all depends on how we respond to it.”
In 2017, Hill Country Foodworks and Pure Castings, which relocated from Austin, joined a smattering of other businesses that opened their doors in Lockhart. This year, at least two more will open their doors and create well-paying jobs in the city: the Lockhart Emergency Care Center, which officially announced it was on its way in December, and Benny Boyd’s newest auto dealership, which is under construction and slated for an official grand opening in the first quarter of 2018, Tobias said.
“Healthcare is a major gap in the county, so having LECC join us and become both a healthcare resource and an employer is a good thing,” Tobias said. “When it opens, it’s going to become an area leader in wages, averaging annual salaries of $60,000.
“Benny Boyd is going to have about 35 employees at an average salary of $50,000, so they will be a wage-leader, too.
“There’s room to add more. We’ve got 1,000 acres of shovel-ready land along SH 130.”
But the EDC director said building on last year’s success will require some proactive thinking that leads to taking action.
Tobias, who’s been in Lockhart for a year, said that continued growth depends on multiple factors, such as building on an already booming barbecue tourism base and creating a strategic plan for economic development.
“What are we doing to build up tourism?” Tobias asked. “We’ve got 1.5 million people coming here each year to go eat barbecue. It reminds me of the importance of a strategic plan, which we don’t have. We need to thoughtfully build on what the community already has to offer.
“We have a historic district, and our assets there are underutilized. We could have guided tours and install better wayfinding signs to let people know when they’re in the historic district and how to get to it from the highway. Right now, there’s nothing to distinguish it. We need to use all the tools that we have.”
Tobias said these tools include Lockhart State Park and the Lockhart County Courthouse, which attracts a number of shutterbugs who stop to take photos of the distinctive structure.
“We need to market the park and get signage promoting it off SH 130,” Tobias said. “We’ve got the courthouse, but we don’t have seating there to keep people in the area longer. We need to enhance the grounds.”
Other things on Tobias’ to-do list include working to attract higher education to Lockhart. The EDC director said he’d like to get a program like Austin Community College or Texas State Technical College in the area, and that the effort to do so could get a boost if the private sector would make contributions.
Tobias also noted that the area could take a shape similar to Georgetown, which expanded when it added Sun City Texas, a Del Webb retirement community on the outskirts of town. The community includes high-end homes located a few miles away from Georgetown’s bustling downtown area – a popular weekend spot dotted with wineries, restaurants and boutique shops.
“There’s a lot of undeveloped land west of the state park that would be ideal for such a community,” Tobias noted. “We could put a retirement community that’s adjacent to the park, making it accessible to the residents. We’ve got to enhance that natural commodity.”