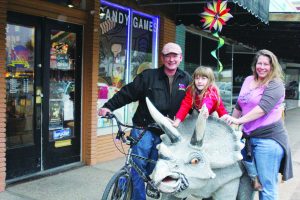 MILES SMITH/
POST-REGISTER
Rick Thomson, left, with wife Jennifer Thomson and daughter, Abigail, opened Flash Candy and Toys in 2016. The business is one of three in town the couple owns. 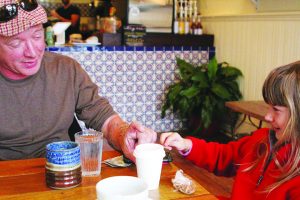 Rick Thomson, left, and his daughter, Abigail, 6, share a laugh over coffee and a hot chocolate.

Sporting a checkered newsboy cap, Richard Thomson stands upright on the pedals of his adult-sized BMX bike as he careens through the puddles on a rainy, chilly Saturday morning in downtown Lockhart.
Grinning as he dismounts his two-wheeled steed and docks it by leaning it against a large triceratops statue that punctuates the sidewalk in front of his business, Flash Candy and Toys, the man everyone knows simply as “Rick” notes my interest in a string of lights that he’s woven around the handlebars and crossbar of his bicycle.
“I ride this bike around a lot,” he chuckles, with a youthful twinkle in his eye. “Local law enforcement told me I had to have it lit up at night to improve visibility, so that was my solution.”
It’s another day at the office for the perpetually busy Rick, a Houston native who owns the unique candy and toy store as well as Bevies Fine Wine and Spirits, and his first local business venture, The Wooden Boat, where he restores antique wooden boats. It’s not uncommon to see him working the floor at all of his businesses in a given day, and occasionally helping work the register or wait tables at other restaurants around the square. Or finishing a long day of work to cater a party at night.
Rick is everywhere.
And although it’s roughly only 150 miles and a two-hour car ride from Lockhart to Houston, you might say the Caldwell County renaissance man took the scenic route from the city he grew up in to the community he now calls home.

An adventure begins
Rick and his wife, Jennifer Thomson, grew up together in Texas’ largest metropolitan area.
“We were high school sweethearts,” he said, stirring his coffee. “We graduated high school and moved away to Austin in ’88.”
For many couples, that’s where the story ends. They get together, they get married, they have a couple of kids and they head to the beach in the summer and grandma’s at Christmastime.
But for Rick, coming of age came with another common symptom: wanderlust and a thirst for the kind of knowledge only diverse life experiences can provide. He packed his bags and headed for the Big Apple, where a job in the restaurant industry awaited him. He and Jennifer said their goodbyes, as she stayed behind to continue her studies at the University of Texas.
“I went up there to work,” he recalls. “I went to work at a Texas-themed bar on the Upper East Side of New York City, at 75th and 1st. It was so out of place, but it was a fun time.”
It was there that Rick got his first taste of the hospitality industry, helping some friends run this hangout that was an apparent Friday night and weekend hotspot for young men and women looking to forge new connections. But while the bartending and waiting biz was rocking in New York, it wasn’t long before Rick continued his adventure.
He didn’t need a lot of encouragement to go try something new.
“One of the waitresses was in her 40s, and she was talking to me one day. She started telling me about how awesome Boulder (Colorado) was,” Rick said. “I said, ‘Alright! I’m going to Boulder!”
He got a job at a Bennigan’s, walking in off the street to inquire about working as a cook (“You can always get work as a cook in a restaurant, as long as you know your way around a kitchen,” Rick advised.) It wasn’t long before he began waiting tables, though … or before he went to his next stop: Aspen.
“Three of us lived in a large closet,” Rick laughs, gesturing to the main room at Chaparral Coffee. “It was about half the size of this room. You walked in, there were some bunk beds on the walls, a small sitting area behind that, and a bathroom behind that. No kitchen.”
But the modest digs in the notoriously pricey tourist spot were not where he or his compatriots spent most of their time.
“I took a job as a head chef.” Rick said. “We were spending the days snowboarding, hiking, climbing … just always doing something outdoors during the day. We’d go back to the apartment, sleep a few hours, and get right back out there and do it all again the next day.
He moved to Portland, Oregon. He moved back to Colorado, this time landing in Gunnison. He eventually landed in Crested Butte, at a venue called the Rafters, where he became a bar manager and learned how to cater to the demands of big-name bands and musicians that would play at the venue.
The journey continued. He got experience working at bigger restaurants with more notoriety. The tips rolled in, sometimes amounting to annual salaries north of $90,000. He and his co-workers worked hard and partied hard at after-hours soirees that would go until the wee hours of the morning.
He was living the high, fast life of a young waiter/bartender, but it would come to a screeching halt as his body and endurance found their breaking point.
“When you’re living like that, you’re living like a rock star,” Rick laughs. “That was the end of my restaurant career. I just couldn’t do it anymore.”

Boats and beverages
Rick and Jennifer opened Bevies Fine Wine & Spirits at 415 South Commerce St. in Lockhart in late November. It’s the newest of their businesses, and it’s been a popular one through the holiday season, Rick noted.
But Rick’s path to the package store business began years ago in Colorado.
Shortly after wrapping up his long bar/restaurant career, Rick met the woman who would give the business its name: Beverly Bowen, his mentor and the woman who gave him his first liquor store job in Colorado.
“I’d been in the food and hospitality industry, so naturally, I went into beer and wine,” Rick said. “I worked in her store and she got me really into wine.”
Rick began working on becoming a sommelier, or wine expert, as Bowen quizzed and trained him, refining his palate. He decided he was going to make a career of wine. He’d become a sommelier – a coveted job in the food and beverage service industry. So, to get more knowledge, he set out for California to find a vineyard and work the harvest. He was bound for Rocchioli, a winemaker in the Russian River Valley, the region where some of the country’s best pinot noirs are fashioned. Needless to say, he fell in love with the area and decided to move once again.
Beverly gave him her blessing when he packed up and headed to the Golden State in 2005, telling him to chase his dream.
But, once in California, it wasn’t his sommelier career that set sail. He started working on wooden boats instead after meeting up with Roy Domke, who refinished and restored antique vessels. He fell in love with the woodworking, spending his days covered in sawdust working with tools.
He loved it so much so that when he had the chance to take an assistant sommelier job, he passed it up.
“Here it was, my dream job … the thing I’d been working my entire life for,” Rick said. “But I couldn’t do it. I loved being in the sawdust and working in that workshop so much.”
He’d continue working for Roy for three years. Around that time, Facebook began picking up steam, and a face from his past reappeared.
Jennifer.
He signed up for the now-ubiquitous social media platform, and it sent a blast to everyone in his Hotmail account, including his former girlfriend. They started talking again, and finally, fate brought him her way. They agreed to catch-up for dinner when he had a connecting flight at Austin Bergstrom.

A romance rekindled
While Rick had been traversing the United States, Jennifer had stayed put in Austin. She bought a home on the east side of town and was working in an HR role for healthcare giant Seton.
As she headed to the airport, she had no idea how her reunion with her erstwhile beau would go.
“In high school, I always knew he was the guy I’d marry,” said Jennifer, who left healthcare behind and now co-owns Flash and Bevies with Rick. “But that night, I knew it could go either way. We’d either hit it off, or he was going to make me mad and I was going to leave him at the airport or the restaurant.”
The former occurred. They had a nice dinner at Magnolia Café and he stopped by her apartment to fix her stereo before hopping back on the plane to return to the San Francisco area.
But the wheels were in motion. Rick would eventually move back home to Austin and continue working in construction, working first on tiny houses before starting his first venture, The Wooden Boat.
Driving back and forth from Austin to the construction site in Luling, Rick would pass through Lockhart. And after awhile, the wheels started spinning: Maybe they just needed a place out in the country.
So, after some hunting around, they found the home they live in today.
“When we moved here, there wasn’t much more than a courthouse and some barbecue restaurants,” Jennifer said.
Life started moving fast. The married couple had their only child, Abigail, now six, on Jennifer’s 40th birthday. The working mom drove the wheels off her car from Lockhart to Austin and back again daily. It was a grueling time for the young family, but it was all about to culminate in the realization of the American Dream.

A unique boutique
In Sept. 1, 2016, Flash Candy and Toys opened its doors on 110 South Commerce Street. A number of day trips to towns like Fredericksburg would serve, in part, as the inspiration for the Thomsons’ new business venture.
“We wanted to open a specialty store,” Rick said. “We wanted a business our daughter, Abigail, could enjoy being a part of.”
“But we’d go visit these towns and we’d approach it from the standpoint of, ‘What is missing in Lockhart that these towns have?’” Jennifer added.
The answer: a downtown candy shop with a traditional, old-time storefront that sells toys and other novelties.
Flash initially specialized in candy. It didn’t become a toy store until it moved through some of its initial shipment.
“You’d be surprised at what $10,000 in candy looks like,” Rick said.
Today, the store is a unique business. It still sells a plethora of candy and rare sodas you’ve never heard of, but the shelves are now lined with a variety of toys ranging from die-cast trucks to board games to high-quality plush animals. Batteries are not a required component for much of what’s sold in the store, which also features gelato – a popular item since Rick acquired an ice cream cooler from a shop that went out of business and needed to unload the equipment.
It’s a place his daughter — already an avid horseback rider who is not afraid to speak up and speak her mind — loves to come to work, he says.
And she’s not alone. The store is a popular one with kids, he notes.
“When I see a little girl walk by, press her face to the glass, look inside and break into a grin, that’s what its all about,” he said.

No burn ban in Caldwell County