In the aftermath of the most massive and destructive fire in Caldwell County history, the men who orchestrated the sometimes dangerous and wholly exhausting effort to battle the blaze have finally taken a moment to take stock of what was lost, what was won, and what was learned as a wall of fire “chewed up” more than 6

“The biggest thing, the thing that we can’t say enough, is how fortunate we are, how much of a victory it really is, that we didn’t lose anyone, and that no one was even injured,” said Chuck Cutshall, the chief of the McMahan Volunteer Fire Department, who was called in as mutual aid when the blaze erupted in Delhi last Sunday.

“What we’re fortunate about is how many people we had standing behind us,” said Danney Rhodes, chief of the Delhi VFD, whose department consists of a smattering of volunteers and two brush trucks – one of which can’t be driven off-road. “I have the smallest department in the county, and we had the biggest fire in history in my district. We’re blessed that we had all the help we had, or this would have been an even bigger tragedy.”

Sometimes effervescent and sometimes reflective, Rhodes and Cutshall talked openly about the fire, the challenges it presented, and the gratitude they feel for what their departments were able to accomplish, and for those who helped them to pick up the pieces.

“There were too many departments to name that came in and helped us,” Rhodes said. “And far too many firefighters to count. In addition to that, we had residents offering their personal equipment, cutting dozer lines for us… without that, we couldn’t have stopped this fire.”

Volunteers also worked tirelessly behind the scenes, Cutshall said, providing food, water and Gatorade for the firefighters, as well as helping to make sure they were rested.

“We had food, 24 hours a day, for the first three or four days,” he said. “And I’m not talking about bring it over here and heat it up… I’m talking about home-cooked meals, all day and all night. They brought us water, they set up cots so we could take some rest… The response from the community was just amazing.”

The nature of fire service in rural Caldwell County is based on the presence and contributions of volunteer firefighters. Those volunteers, often in under-funded departments, are the residents’ first line of defense against disaster.

“I think what this fire has showed people here in Caldwell County is that we do have a professional – not paid, but professional – fire service,” Cutshall said. “We train, we work hard… It’s not just a bunch of old-timers that want to sit around, drink beer and go play with fire.”

“We have firefighters that didn’t go to work so they could help us on this,” Rhodes said. “Some took vacation time, and some just called in sick. Some don’t know if they’re going to have jobs when they go back… But I haven’t heard anything like that, of anyone losing their job because they took off to help.”

Both departments, the Delhi VFD and the McMahan VFD, worked in concert on the scene for eight solid days, with neither Rhodes nor Cutshall leaving the scene for the first four days.

“When this thing started, [Cutshall] said that McMahan was going to be here with us until it was over,” Rhodes said. “And along about the middle of the second day, I started to wonder. But every time I looked over my shoulder, he was still right there.”

Of course he was, Cutshall said, as were the many volunteer firefighters in his department.

“These are our neighbors and our community, too,” Cutshall said, “even if it isn’t technically ‘our’ district. So we weren’t going anywhere until this thing was out. We even had some firefighters that we had to order off the scene, to go and rest, because they were going to stay here as long as we were here.”

Sometimes, you just have to get out of the way 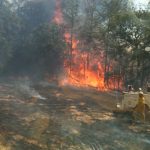 For the firefighters in the center of the blaze, there were many dicey moments.

“There were some times that we lost communications with trucks, and we had to send people off rest back into the fire to make sure they were okay,” Rhodes said. “There were other times when we had to really hold people back, because your instinct as a firefighter is to put water on a fire and put it out.”

This fire was impossible to fight on those terms.

While the official cause of the blaze has not been determined, witnesses said the high winds that helped the fire to spread so quickly caused two power lines on FM 713 to collide, sending a shower of sparks into the high, dry grasses, and sparking a blaze that could be seen for miles.

That blaze quickly jumped FM713 and ripped through the majestic pines cluttering the Sand Hills near Delhi.

“When those trees went up, it was just like a 200-foot wall of fire coming at us,” Cutshall said. “And we just don’t have any equipment where you can fight something like that. So instead of trying to fight it, we had to just let it go through the woods, and catch it when it came out into the pastures.”

He said the move was counterintuitive to some firefighters, but that it was  the only way to preserve life.

“What we had to do was focus on what we could do… and with a fire like this, sometimes all you can do is get out of its way.”

With a catch in her voice, Bernadette “Boo” Cutshall said that she and a partner had to walk away from one structure and let it burn. It continued to smolder on Tuesday afternoon.

“You don’t want to have to walk away from a structure, but sometimes all you can do is squirt a little bit of water on it, and move on,” she said. “It’s a shame, but it was the only way for us to stay safe.”

All told, the blaze destroyed 16 residences, mostly weekend places and hunting cabins, Boo Cutshall said, as well as some 15 outbuildings.

“I think that there were only three places that were a primary residence,” she said.

Someone was watching over us 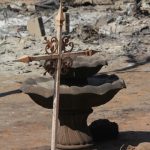 In the aftermath of the fire, Rhodes and Cutshall have taken stock of what happened, and what they could do better next time.

“There’s truth to the idea that we were just God’s pawns, and he put us where he wanted us to put out this fire,” Cutshall said. “There were so many things we saw, so many things that happened that you just can’t explain any other way.”

One such event, Rhodes said, was the firefighters’ saving one residence six separate times.

“We were doing regular checks, and it just so happens that six different times, when we checked on one particular house, the fire was creeping up to it,” he said. “Every time, they fought it back, and one time it was coming up the steps and at the house itself. But every time, we put it out, and that house is still standing today.”

In addition, he said, the cooler temperatures played a part in the lack of injuries.

“If we’d been dealing with the heat like we had before and like we’ve had since, we would have had a lot of heat exhaustion,” Cutshall said. “But it was a little bit cooler while we were fighting this fire, and that really matters in the fact that not only did we not lose anyone, but no one was even injured.”

Both the Delhi and McMahan VFDs continue to keep close watch on 6,500 acres of scarred, charred brushland, which continues to smolder more than a week after the fire first sparked.

What’s more, both departments, as well as other area departments that assisted in fighting the blaze, are taking stock of where they will go from here. Their financial resources have been gouged, and much of their equipment was damaged.

“By the time we got to the end of this fight, we all had hoses that were damaged, parts were falling off trucks, air filters that were too clogged for the vehicles to go on anymore,” Cutshall said.

“At that point, we were just saying, ‘Okay, a part fell off, just pick it up and we’ll put it back later, if the truck is still moving,’” Rhodes agreed. “Departments have other people’s equipment, firefighters have other people’s radios… We’re going to have to set up a lost-and-found.”

But what they also have to do is find a way to put the pieces back together. The county’s volunteer departments are run on shoestring budgets, with a $650 monthly stipend from Caldwell County, the contributions they receive from their neighbors, and the money they raise through fish frys, bake sales and plate suppers.

“We’ve got a long way to go to get everything rehabbed, repaired and back up and running,” Cutshall said. “And we’re trying to do that before the next fire happens – big or small. We have to be ready for whatever’s coming next.”

Both departments have set up websites for online contributors, and are accepting donations. In addition, the McMahan VFD is preparing for their annual Dutch Owen Memorial Barbeque and Auction fundraiser on Oct. 3.

To find out how you can help, visit http://sites.google.com/site/txvfddelhi/ or http://mcmahanvfd.webs.com/.