Big changes are coming for the Lockhart Independent School District.

District officials hosted a tour on Tuesday evening to unveil the progress of construction at both Lockhart High School and Alma B. Strawn Elementary, the two pinnacle projects of the $63.9 million bond package approved by voters in 2014.

ckhart High School, students and staff have been stressed this school year by the sweeping construction project, which couples new construction of classroom and technical wings with an overhaul of existing campus space, leaving some parts of the campus nearly unrecognizable. 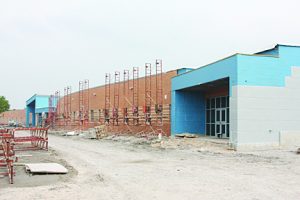 The first phase of the project, which project manager Jo Zunker said will be ready for student occupation by August, includes the construction and overhaul of classroom wings on the northern face (Center Street side) of the building, along with construction of the Career and Technology (CTE) wing, which includes massive shops for agriculture, auto tech and auto body and welding, along with a commercial kitchen and two food service classrooms with more than a dozen kitchenettes.

“This space is so much better than what the kids have now,” Zunker said during the tour. “Not only have we expanded all of the shops, but each of the shops has an adjoining classroom, because the teachers spend about half their time on classroom work, and half the time on hands-on.”

Other improvements that have been under construction this year include a sweeping overhaul of Lion Stadium, which will be home to a new press box and a new lavatory facility. As a result of the construction, the Home side of the stands will switch to the west side of the stadium.

Zunker said the projected completion date for the stadium is Aug. 1, so the stadium will be ready for the Lockhart Lions to use the stadium as they begin their two-a-day practices this summer.

In the main building, contractors have been working to expand common areas, and have built a large, secure foyer into the space that was once occupied by the LHS Conference Center. Additionally, a large counseling suite will allow college and career counselors added privacy to assist students. 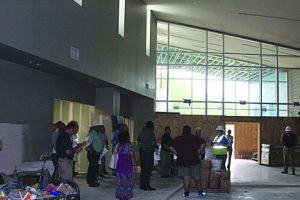 An upgraded clinic, including examination rooms and an ADA-accessible shower will ease the pressure on the school nurse, who often has to close the clinic to assist individual students.

The second phase of the project, which will begin over the summer, includes the joining of the new building face with the cafeteria and the CTE wing. Additionally, demolition and construction will take place to begin expanding the current “300 wing” into a two-story classroom wing.

As the project on Center Street moves forward, students will continue to have to make adjustments to accommodate the construction and demolition, Zunker said. However, when the work is complete in 2017, Lockhart students will be gifted with a state-of-the-art high school, which will allow not only room for future growth, but for the reintroduction of ninth graders to the Lockhart High School campus.

Near Lytton Springs, another state-of-the-art facility is taking shape, in the form of Alma Brewer Strawn Elementary.

The new school, which will be open for education at the beginning of the 2016-2017 school year, and offers a variety of luxuries not currently available at Lockhart’s elementary schools.

Chief among those upgrades is a secured vestibule that will require all visitors to check in at the front office before gaining access to the building.

The “secured vestibules,” Zunker said, will eventually be constructed at all LISD campuses. Each will require key-carded security to enter the campus proper, and will cut off access to visitors who have not checked into the office.

The campus also includes restrooms in each classroom for Pre-K – second grade. 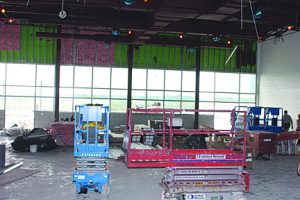 “Every classroom in the wing for ‘the little guys’ has a private restroom,” Zunker said. “This is something we see happening more and more in schools, and it helps the teachers keep classes moving forward, and is also safer for the younger students.”

The second story of the building will be occupied only by the older students, fourth and fifth graders. Elevator access has been built into the campus, but will only be accessible by staff with electronic key cards, Zunker said.

The campus also boasts an expansive library space, which includes a technology room behind glass walls.

“There will be computers out in the library area as well,” Zunker said. “The technology room is for teachers to bring the whole class in, if they need to do a lesson that way.”

Strawn principal Patricia Rocha joined the Lockhart ISD staff earlier this year; she has hired a secretary and both stand ready to move into the school in June.

Over the summer, Zunker said, construction will be taking place at nearly every campus in the District.

As soon as classes dismiss in June, work will begin on a variety of air conditioning and other upgrades that have been slated by the Lockhart ISD Board of Trustees in connection with the 2014 bond project.

Constant updates on the construction process are available on the District’s website at www.lockhartisd.org.

Follow future editions of the Post-Register for more information on bond construction.