By Martha Aiken
Special to the LPR

It looks like Lockhart is going to make another appearance in the movies.
Cast and crew were on location in a few different spots this week in the Caldwell County seat filming “One Hand Clapping,” directed by Jerry Deal, who grew up in Texas.
The film is the story of a family’s journey back to wholeness as three brothers return to their small Texas hometown to reconcile with their dying father.
The independent film by California-based Way To Go Media, which Deal owns with his wife, Berry, staged scenes at a gas station known as “the old Tommy Holland garage” on South Main.
Berry Deal, executive producer, said the crew will return to Lockhart April 13 to film a scene near the courthouse. Deal said that while filming at the garage “took all day,” the weather was pleasant and the cast and crew enjoyed sampling some barbecue.
The film has been in the works for a few decades.
Jerry Deal wrote the first draft of the screenplay in the late 1980s. It was optioned twice by Los Angeles production companies in the 1990s, but never ultimately saw the light of day.
Since then, the film has gone through numerous drafts, Berry Deal said.
The film won best screenplay in the fictional category at the 2013 Angel Film Awards, a part of the Monaco International Film Festival in Monte Carlo. 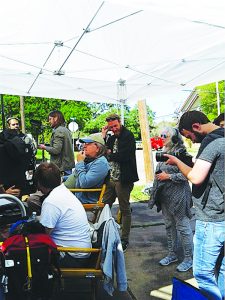 Caldwell County and Lockhart have seen a number of film crews come through to shoot scenes for movies and TV shows. The cast and crew of independent film “One Hand Clapping shot scenes at a few locations in Lockhart over Easter weekend, and are planning to return to town later this month. Martha Aiken/Special to LPR