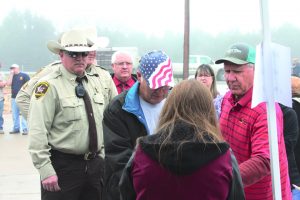 Kirk Kuykendoll, left, patrol captain with the Caldwell County Sheriff’s Office, waits in line for a fried fish platter being sold to benefit Deputy Jay Johnson, who is continuing his recovery at his San Marcos home. Miles Smith/Post-Register

The Caldwell County Sheriff’s Office deputy injured in a shooting on Feb. 2 has left the hospital and his home recovering with his wife and dogs, his friends and family reported on Monday.
“Deputy Jay Johnson has been paroled … just in time because I’m afraid he was going to tie his bed sheets and rappel down with Ms. Elizabeth on his back,” the moderator for Friends Of Jay Johnson – Caldwell County Deputy posted on Monday afternoon. “We’re very, very proud to represent this young man online and like we told him this a.m., we’ve got his back and we aren’t going anywhere.”
That indeed seems to be the case. In the past few days, the Facebook page set up to post updates on Johnson’s progress has filled with notifications of fundraisers designed to raise money for the couple. While Johnson is receiving 100 percent of his pay from Caldwell County as he recovers, the couple relies on his ability to work overtime hours to pay their monthly expenses. Additionally, his wife, Elizabeth Johnson, works at a special needs home in New Braunfels and anticipates needing to miss more work to help care for her husband, she said in an interview last week.
The first of the fundraisers kicked off on Friday – a fish fry at Synergy in Bastrop that was co-hosted by the Bastrop Association of Sheriff’s Employees. People from both Bastrop and Caldwell counties showed up in droves to buy $10 fried fish plates. The food was donated by Synergy, a financial planning company that focuses on public servants and professional athletes.
Proceeds from the event were not available at press time.

To read the full story, pick up a copy of the Post-Register.