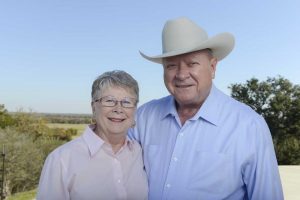 Evelyn Gwendolyn Ward was born in Tyler, Texas, on Nov. 12, 1946. She slipped her Earthly bonds in her Lockhart, Texas home, surrounded by the love of her family and friends, on March 4, 2018.

Evelyn was one of the six daughters of Louie Howard Ward and Naomi Anita Ward (nee Markham). The family traveled extensively around the state, eventually settling in Corpus Christi, Texas, where Evelyn finished her public schooling at W.B. Ray High School. She then moved to Houston, where she met and married the love of her life, Rick Schmidt, on June 6, 1975.

The couple moved to Lockhart in 1982, spending the last 35 years building their family, their business and their ranch. The pair loved to travel and saw much of the world had-in-hand, even as Evelyn’s health began to fail.

She leaves to treasure her memory her husband of nearly 43 years, Rick Schmidt; her sons, Leeman Schmidt and wife, Dagny, and Keith Schmidt; her granddaughter, Reagan Neely and husband, Mike; great-granddaughter Mara Neely; sisters, Kay Countis, Becky Phillips and husband, Barry, and Jennifer Campbell and husband, Randy; her brothers-in-law, Russell Moody, Don Nowak and Don Schmidt and wife, Dianne; her sister-in-law, Nina Sells and husband, Jim; numerous nieces and nephews and their families; and more friends than there are stars in the sky, all of whom she loved as dearly as family.

Services will be held at Ebenezer Lutheran Church, 291 Church St. in Maxwell, on Wednesday, March 7. The family will receive callers in the Education Building, beginning at 9 a.m., with a funeral service following in the Church sanctuary at 11 a.m., with burial following in the Ebenezer Lutheran Cemetery. Evelyn’s pallbearers include: John Buckner, Danny Buckner, Jackie Campbell, Jack Hill, Roy Kana and Jeff Van Horn. Honorary pallbearers are the Bluebonnet Electric Coop board of directors and senior staff, and BBEC Lineman Rodeo Team.

Friends and family are invited to return to the Education Building for a reception, immediately following the graveside service.

In lieu of flowers, the family suggests donations in Evelyn’s name to the Ebenezer Lutheran Church Building Fund, PO Box 95, Maxwell, Texas 78656, or to the charity of your choice.

Arrangements under the care and direction of McCurdy Funeral Home.

To view and sign the guestbook, visit http://post-register.com/obituaries/evelyn-schmidt/ ‎