Exchange students give lesson on cultures at Lockhart Kiwanis Club 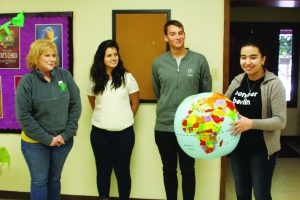 Miles Smith / POST-REGISTER
Martuna Ahrorzoda, right, shows Kiwanis Club members where her country, Tijikistan, is on an inflatable globe. Ahrorzoda, along with Greenheart Area Coordinator Suzy Falgout and fellow exchange students Nouran El Khashap and Pietro Laudenzi, talked about her experience as an exchange student at a program on Tuesday.

Pietro Laudenzi, Nouran El Khashap and Martuna Ahrorzoda are each from countries that are miles apart from one another, but the three teens have one thing in common.
Namely, they’re all living in Lockhart for the year, where they’re attending classes at Lockhart High School through various student exchange programs that allow them to absorb U.S. culture while teaching local Lockhart students about their own countries.
The three teens on Tuesday joined Suzy Falgout, area coordinator for Greenheart Exchange — which offers cultural exchange programs that connect Americans with international students — at Emmanuel Episcopal Church, where they answered questions from members of the Lockhart Kiwanis Club.
Laudenzi, 16, of Italy, said he was enjoying his stay in the Caldwell County seat. He’s wasted no time getting involved and absorbing the local culture, even playing a major role in the Baker-Gaslight production of “Cheaper by the Dozen,” which ran in December.
“The first thing I learned about this place when I got here was that it was the Capital of Barbecue,” Laudenzi said to a room of approving laughter. “The barbecue’s great here! I think I started liking this place immediately after that.”
Laudenzi said one of the most rewarding things about being in Lockhart was having the chance to tell people who’d never visited Italy about his culture and country’s customs.
“We go beyond being just spaghetti and meatballs,” Laudenzi said. “It’s great to let people know that we’re more than just a food, more than just a city they’ve visited. We get a chance to meet our second, mom, our second dad, and our new brothers and sisters.”
What Laudenzi is referring to is his host family. Each of the students lives with a family that is matched to them by way of something similar to a personality profile. The student can be matched with either a single parent or a traditional family – and in some cases, they can meet new brothers and sisters that they stay in touch with for life, Falgout said.
“There are some families with children who participate in the program and have a foreign exchange student living in their home every year,” Falgout noted. “The kids in these families wind up with brothers and sisters from around the world. It’s pretty neat, because someday, when they’re traveling abroad, they’ll have people they can visit.”
If you attended Christmas Mass at St. Mary’s, you may have seen Ahrorzoda, who lives in Tajikistan, a country in Central Asia surrounded by Afghanistan, China, Kyrgyzstan and Uzbekistan. The 18-year-old, who enjoys singing, gave a solo performance at the service.
“A lot of people think I’m Russian, but I’m not,” she said. “We have a very deep culture with our own customs and traditions.”
El Khasap, 17, is from Egypt. She echoed Laudenzi’s sentiment (“We’re not just desert and walking like an Egyptian,” she laughed.) and added that the program had given her a chance to practice the English language.
“We learn it when we’re young — we can read it, we can understand it when it’s spoken to us — but we don’t get much of a chance to speak it in a conversational setting, so we’re weak at conversation,” El Khasap said. “We’re a long way from where we were when we first got here.”
Falgout said Greenheart Exchange was currently accepting host family applications. If you’re interested, e-mail her at Greenheart_suzy@icloud.com, or visit www.geo.greenheart.org.

Christie Pruitt to take over as Lockhart ...