FOR THE WATCH: Timepieces are Lockhart jeweler’s specialty, he says 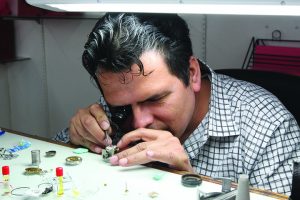 Jose Bunuelos works on a customer’s watch at Armando’s Jewelers in Lockhart. Bunuelos took over the Jewel of Lockhart in January and has been hard at work servicing timepieces ever since. He also owns a shop bearing the same name in San Antonio. Miles Smith/LPR

It’s no longer the Jewel of Lockhart, but there are still jewels inside the shop that’s long been a landmark at 101 W. San Antonio Street.
In January, the shop was purchased by Jose Banuelos, who renamed it Armando’s Jewelers. Banuelos also has a shop by the same name in San Antonio on West Avenue.
The shops are named after Banuelos’ 16-year-old son, Armando. The jury is out on whether Armando will take over in the footsteps of his father, though.
“Hopefully,” said the elder Banuelos as he worked on a wristwatch at his workbench.
Watches are Jose’s thing, he says, explaining that where jewelry is concerned, he considers himself more of a watchmaker. The shop specializes in watch sales and watch repairs, including Rolexes, which require a certain level of care and precision.
To read the rest of the story, pick up a copy of the Post-Register.