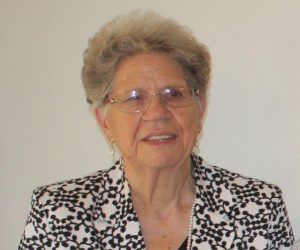 Georgia Mae Chambliss, 82, of Dale, Texas passed away April 15, 2018 at Parkview Nursing Home in Lockhart, Texas. Georgia was born February 22, 1936, in Vernon, Texas, to William Christopher and Mary Emma Besselman Line. She grew up in the Vernon and Northside areas. Georgia graduated from Vernon High School in 1954. She married Norman B. Chambliss on June 5, 1954, in Vernon. Norman’s career with the Air Force and Civil Service led them to live in Texas, Louisiana, South Carolina, Georgia and Oklahoma. Norman and Georgia added three daughters to their family. Georgia was a stay-at-home mom and also did upholstery out of the home while raising the girls. After Norman retired, they moved to Dale, Texas where Georgia became a rural route carrier for the United States Post Office until she retired. She and Norman loved to travel and went on many adventures together. One of their favorite places to go was Lake City, Colorado. Georgia would hang on tight as she rode with Norman on their ATV. During their time in Altus, Oklahoma they were faithful members of the Thomas Street Church of Christ where Georgia taught many children’s Bible classes and was very active in the bus ministry there. After they moved to Dale, they were faithful members of the Lockhart Church of Christ.
Georgia is survived by one brother, Travis Line and his wife, Anni, of Kempner, Texas, her brother-in-law, Gene Chambliss, of Dale, her two daughters, Karen Buckner and her husband, Billy Ray, of Lockhart and Beverly Killebrew and her husband, Larry, of Beggs, Oklahoma; four grandchildren, Amber Fletcher and her husband, Mike, of Vancleave, Mississippi, Todd Goucher and his wife, Kayla, of Boiling Springs, South Carolina, Sarah Hallsted and her husband, Thomas, of Glenpool, Oklahoma and Amanda Killebrew of Tulsa, Oklahoma. She has twelve great-grandkids, Camryn, Cason, Callen and Caden Fletcher, Nathan, Taygen and Emilie Goucher, Lily and Carson Hallsted, Ryder Killebrew and TesaFaith and Nora Smith.
She was preceded in death by her parents, William C. and Mary Emma Line, her husband, Norman B. Chambliss, twin daughters, Norma Jean and Carma Dean Chambliss, eight sisters and one brother, Ola Spille, Marie Hart, Oleta Bentley, Doris Haynes, Wanda Edmonds, Wilma Jean Hardage, Everett Line, Laura Patton and Katherine Horton.
Her services will be Friday, April 20, 2018 at the McCurdy Funeral Home in Lockhart, Texas. Interment will be at the Bunton Cemetery in Dale, Texas.
To view and sign the guestbook, visit www.post-register.com/obituaries/Georgia-Mae-Chambliss