Judge Schawe: ‘I did not have a baby’ 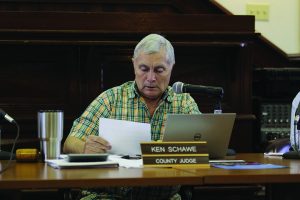 Caldwell County Judge Ken Schawe said Monday at commissioners court that diverticulitis complications had been the cause of the mystery illness that had sent him to the hospital for emergency surgery just days after the March 6 Republican primary election.
Diverticulitis is the inflammation of a small bulging pouch or pouches that can form in the colon over time, according to Mayo Clinic. The inflammation can lead to blockages, abscesses and can even cause the bowel to rupture.
“I did not have a heart attack, I was not in a coma, and I did not have a baby,” Schawe said during commissioners’ announcements. “I had diverticulitis. I was in severe pain from a serious infection.”
Schawe confirmed that he’d had surgery the same afternoon he’d seen his doctor.