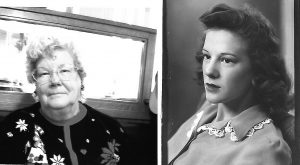 June LaVaughn ”Bonnie” Atkins Cadenhead Patterson, 94, as of Monday, Aug. 6, 2018 has found her “Happy Trails” back to her heavenly home. She will lovingly be remembered by her daughter, Patti and her husband, Lew White D.D.S., grandchildren Cade White, Ross White, Adam Cadenhead, Hannah Cowan, Christopher Harvey, Amy Cambell and their respective families, her sister Norma Lea Hallcroft and sister Babe Ullom. She also is survived by 11 great grandchildren and various nieces, nephews and cousins. She was predeceased by her husbands, Philip Wayne Cadenhead D.V.M. and Vernon Willard Patterson , her son, William Curtis Cadenhead and daughter, Mary Jewel Harvey.
Bonnie was born on June 7,1924 in Gehring, Nebraska to parents Mary and Earl Atkins. Oldest of 5, which she helped raise, she graduated from Natrona County High School in Casper, Wyoming, in 1942.
She met her 1st husband, Phil, in Casper during WWll at a USO dance. A handsome Texan with a big smile, wild sense of humor and dancing shoes, their attraction led to marriage on July 29,1945 after Phil returned from overseas. She immediately became a war bride by moving to Weinert, Texas, Phil’s hometown. They were married for 36 years living in College Station and Hempstead, Texas and raised their 3 children. She was his business manager and assistant to his veterinary practice.
After Phil died, she reacquainted with her former high school sweetheart, Vern and they married on December 12,1994 in Douglas, Wyoming. They lived a happy life in Casper together for 15 years. After Vern’s death, she moved to Lockhart, Texas in 2009 and has lived here until her passing.
On August 25, 2018 at 11:00 am, a memorial service was held at Emmanuel Episcopal Church in Lockhart. Officiating was Father Tom Bruns and assisting him was Greek Orthodox Chaplain Father David Moretti.
The family wants to especially thank all the staff from Encompass Hospice Care for their wonderful care for 3 years for Bonnie.
Bonnie loved reading, movies, crocheting, quilting, painting and cooking for all of her family and friends. Memorial donations in memory of Bonnie’s daughter, Mary Jewel Harvey, can be made to the Spina Bifida Association.spinabifidaassociation.com
To view and sign the guestbook, visit www.post-register.com/obituaries/June-Bonnie-Patterson