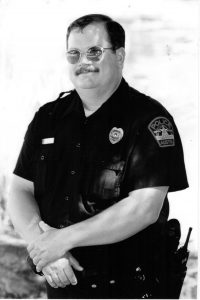 Keith Alan Hamblin passed away on February 22, 2018 at Central Texas Medical Center. Keith left this world surrounded by his loving wife of forty years, Alice Hamblin, his children, Kristin Scott and husband, Alexander, Keri Wilkins and husband, Haskell, Garrett Hamblin and wife, Morgan, and his brother, Jimmy Hamblin.
Keith was a lifelong resident of Lockhart, Texas, where he attended Lockhart High School. While attending Lockhart High School, Keith met Alice Masur, the love of his life. Keith and Alice were married on August 13, 1977, shortly after Keith graduated from the Austin Police Academy. Keith and Alice made their home in Lockhart, where their three children were bom and raised.
Keith served in the Austin Police Department for thirty years, rising to the rank of Corporal before retiring. Keith served both in patrol, and as an instructor at the Austin Police Academy, where he taught cadets the skill of tactical driving. Keith’s penchant for accidents while on the job, made him an ideal candidate to teach new cadets common errors made while driving. While on patrol, Keith was the consummate professional. Well respected among his peers for his honesty and reliability, Keith led by example.
To truly appreciate Keith, one only had to watch him as a father. Keith was deeply devoted to his family and put nothing ahead of the needs of his children. Whether doting on his eldest, Kristin, traveling to watch his daughter Keri’s college volleyball games, or hunting in the woods with his son, Garrett, Keith was never more pleased, than when he was with his children. Keith’s favorite activity was to watch all three of his children play soccer. Keith seemed to be keenly aware his legacy would be carried on by his children and he strived to instill the best in each of them. Keith took an active role in his children’s life and ensured they were aware of how much he loved each of them.
A seamless transition into life as a grandfather, Keith was at his best with his grandchildren. He adored his granddaughters, Blakely and Larkin, and was every boy’s wish for a grandfather. Keith had already purchased a bow for his grandson Bishop and had his eye on another for his grandson Korbin. Keith was elated to hear he was expecting another granddaughter in July 2018.
A man of few words, conversations with Keith could be a difficult endeavor. The speaker was often left wondering if Keith was listening or was interested in what was being said. The answer would often be found in Keith’s meaningful reply. Since Keith was a man of few words, when he spoke people listened, if he said it, it was gospel.
A selfless man, it is not difficult to find a member of the community whose memories of Keith begin with “Keith taught me to…”. Married to a teacher, Keith discovered joy in the passing of his knowledge to others. Keith would gladly teach others, whether hunter’s education, at the Austin Police Academy, or everyday life hacks that are gained with time, it was his pleasure to share it with others.
As paradoxical as it sounds, Keith loved science fiction and astronomy as much as he loved firearms and hunting. An avid reader, it was not uncommon for Keith to read entire science fiction novels in a single weekend. Whenever new science fiction movies would arrive at the theater, Keith would be the first person to call if you wanted to know what the movie was about. This is because it was almost guaranteed that Keith had read the book. His knowledge of the stars went beyond the basic constellations. Keith could be found in a dark field, looking through his telescope, during any meteor shower.
It’s difficult to summarize the life of a man in a few paragraphs. It almost feels unjust to their memory. This could not be more true than in my attempt to write about Keith Hamblin. Keith stood six feet tall but was a giant among men. Keith stood above most others in his life, but never acted as if he did. Keith was a husband, a father, a grandfather, a brother, and a son, but more than this, he was our hero.
A memorial service will be held at 10 a.m., Friday, March 2, 2018 at St. Mary’s Catholic Church.
In lieu of flowers donations may be made to Austin Police Association or The Cancer Society.
Arrangements under the care and guidance of McCurdy Funeral Home, 105 E. Pecan, Lockhart, Texas 78644. To view and sign the guestbook, visit http://post-register.com/obituaries/Keith-Hamblin.