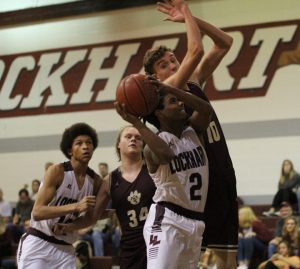 The Lockhart Lions on Tuesday opened district play with a home loss, falling 46-31 to Dripping Springs.
The Lions trailed only 24-15 at halftime after getting hot in an 11-point second quarter, but the Tigers extended their lead to 19 after coming out swinging in the third quarter, creating a deficit that was too much for Lockhart to overcome despite a scrappy fourth quarter that left Lions head coach Josh Billows encouraged about the season to come.
“I thought the kids played hard, and we know what we need to do to play better,” Billows said. “Dripping Springs went off in the third quarter, and that ended up being the difference.
“I saw two evenly matched teams out there tonight. The only difference was one made their shots in the second half and the other one didn’t.”
The Lions are 6-7 overall, including non-district play, and have gone 5-2 over their last seven games.
“Dripping Springs is very skilled, and they’re very tall,” Billows said. “We’re in a district where all eight teams can beat one another on any given night.
“I thought Devon Clark played really well for us, and our guard Adam Romero, did a great job getting them into foul trouble and giving us a chance.”
Clark led all Lion scorers with nine points. Michael Joseph and Romero each added six.
The Lions will get a reprieve from district play during the holidays, playing at the Hays Rebel Championship Dec. 28-29. They will resume district play on the road against Alamo Heights on Jan. 2