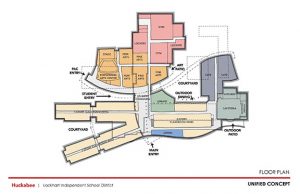 The time is drawing near for the Lockhart IS

D Board of Trustees to make a final decision about holding a bond election, allowing the District to draw up to $62 million in bonds for vast improvements to Lockhart High School, as well as other construction and improvement projects throughout the district.

During a marathon meeting on Monday evening, the trustees heard information not only from in-house Chief Financial Officer Tina Knudsen about LISD’s financial position, but also from consultants with Owners’ Business Resource (OBR) about the timeline and scope of such an election.

To hold a bond election in May, which seems to be the consensus direction the Board wishes to take, a final decision has to be made by the end of February to call the election. One of the leading decisions the Trustees must grapple with is how much money to borrow, on what time frame.

According to Robert Gadbois with OBR, the renovation of Lockhart High School, which will not only vastly improve the facility, but will also allow for freshmen to be re-integrated into the high school population, is estimated at $44 million.

Additional revenues will be earmarked for construction of a new elementary school, at an estimated $13.5 million, as well as improvements at other campuses totaling around $4.3 million. The Trustees are considering whether to borrow that money in one fell swoop, or to spread out the borrowing over a period of years as student growth requires the construction projects.

A certainty, according to Gadbois, is that action must be taking toward the renovation of Lockhart High School as soon as possible. In addition to being overcrowded, Gadbois said the campus is “functionally inadequate” to serve the student population.

To that end, the Trustees heard another presentation from the architectural firm of Hucakbee and Associates, who have been contracted by the District to design the high school.

Instead of engaging in new construction, Huckabee has presented an elaborate plan that will utilized some pieces of the existing structure in addition to adding elements including a two-story wing, a performing arts center and courtyard spaces for student gatherings.

The most recent plan presented to the Trustees is a merger of three plans presented last month, which were sketched after hours of consultation with not only administration and staff, but students of the high school and members of the community.

In addition to the graphic featured in today’s Post-Register, additional information about the project is available online at www.post-register.com.

The Trustees will discuss additional elements of the proposed bond project during a special called meeting on Feb. 10, 2014. The meeting will be open to the public, and webcast on the District’s website, www.lockhartisd.org.