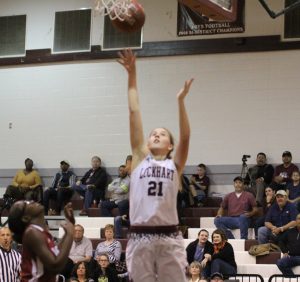 The Lady Lions hoops team is officially on the board for district play, grabbing their first district win Tuesday night over Alamo Heights, 67-33.
Kara Pickle led the winning effort with 25 points. Princess Daniels added 19 and Kallie Krenz had 11.
The JV fell 31-17 to Alamo Heights.
The district win comes on the heels of a hot streak for the Lady Lions, who lost their first two district games but rebounded in the nondistrict Boerne Tournament Dec. 28-29, winning three of four games.

A stalwart effort was not enough to rally the Lockhart boys against district standout Alamo Heights, as the Lions fell 62-35 after trailing by only four points in the first quarter.
“We played really well,” said Lockhart head coach Josh Billows. “Alamo Heights might be the best team in the district this year. They’re just pretty dang good.”
Adam Ramirez led the Lions with 17 points, and Devon Clark added 12.
The team played in the Hays Invitational against 6A competition the week before and went 0-4 with a pair of close losses on the second day.
Lockhart led for most of the game against Austin Crockett before falling 59-54. Later, against Cedar Creek, they fell in a 57-54 decision.
“We’re in a bit of a losing streak, but we’re playing good ball,” Billows said.

Republican to run as write-in