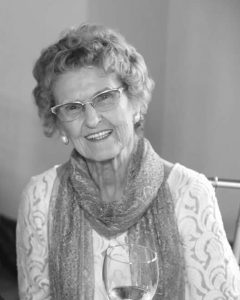 Mildred McClish, 85, passed away Friday, September 14, 2018, in Keller, Texas.
Funeral: 11:00 AM, Thursday, September 20, 2018, at Keller’s Old Town Funeral Home at 220 Keller Parkway, Keller, Texas.
Graveside: 11:00 AM, Friday, September 21, 2018, at Smithwick Cemetery, Smithwick, Texas.
Mildred was born to Walter and Lydia Schkade Schneider on January 23, 1933, in Albany, Texas, the ninth of eleven children. Mildred grew up in Albany and graduated from Albany High School in 1950. After graduation, she moved to Austin to attend beauty school, where she met her husband, James Duff McClish. Mildred and Duff were married in June 1952. They moved to Boise, Idaho in 1954, where she continued her lifelong calling as a wife and mother. They returned to Texas to live in El Paso for a few years before moving to Lockhart, where they lived until they retired to Eagle Mountain Lake in Azle in 2005. Duff passed away in 2009, and Mildred moved to Keller to live with her daughter.
Mildred’s passions were loving and learning. Her family was her highest priority and always the focus of her life. She taught her children by example that if “you can read, you can do anything.” Wherever she lived, she volunteered in church and community organizations such as Meals on Wheels and Caldwell County MHMR.
She and Duff went fishing whenever they could. Together she and Duff expanded their passion for fishing into their community service as they fried and served their catch at community organization fundraisers.
As her children grew older she expanded her vision to include work outside of the home. Her people skills contributed to her success in a variety of sales positions; however, she was most passionate about her time spent as an art broker. For several years she specialized in the preservation of family memories through photo restoration and portraiture.
Mildred was creative, outgoing, vivacious, and fun. No matter what she did, she did it wholeheartedly and with great enthusiasm. She was an unabashed optimist and believed in the best possible outcome for any venture. In her later years, her great-grandchildren became the true joy of her life. She would tell you that “children are great, grandchildren are grand, but great-grandchildren are grander.”
Mildred was preceded in death by her husband, James Duff McClish, Sr.; son, James Duff McClish, Jr.; granddaughter, Kelly Diane Werlinger; and grandson, James Duff McClish, III.
Survivors: Brothers: Ernest and Lawrence Schneider. Daughters: Diane McClish Grove and husband, Bill; Lynn McClish Will and husband, Greg; Lellah McClish Werlinger and husband, Joe. Daughter-in-law: Diana Jones. Grandchildren: Stephanie Girling, Emily Grove, Gregory Will, Victoria Will, Ashley Will, Ian Shelly, Israel Shelly, Jacob Shelly, James Shelly. Great-grandchildren: Brittany and Robert Girling, Blake Estrello, Hailey Grove, Abigail and Gregory Will, Aiden and Maci Corner, Kennedy Fleagle, Angela and Amber Shelly, Jay Whitney, Justin and Benjamin Shelly, Persiphane Infante, and Patrick, Payton, and Primrose Shelly; and her dear friend of the past six years, Renee Smith.
To view and sign the guestbook, visit www.post-register.com/obituaries/Mildred-McClish