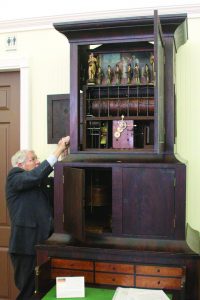 The Southwest Museum of Clocks and Watches will celebrate the tenth anniversary of the day it first opened its doors in Lockhart, giving the community a rare museum devoted to the preservation of timepieces from around the world.
The museum is celebrating this milestone with a ribbon cutting in front of the 109 E. San Antonio St. location it moved into last year at 11 a.m., this Saturday, March 24, followed by a reception in its front lobby.
Charter member Kara McGregor, one of the museum’s earliest supporters, said the museum has enjoyed more popularity and a growing turnout since moving to its new location across from the Caldwell County Courthouse, which boasts an iconic clocktower of its own.
“The museum has enjoyed twice as many visitors in its new location, with tourists from all over Texas and the U.S., plus international visitors from Canada, Great Britain, Japan, South Korea, Belgium and Germany, to name a few,” McGregor said. “Donations have improved, but we’re hoping for more help as we move through the year. The museum’s supporters are grateful to Bill Genn, our gracious landlord who made the new location possible.
“The museum’s proximity to the Courthouse and Tower Clock highlights some important aspects of Lockhart’s history and charm, and draws visitors from around the world as an eclectic addition to the many sights in Lockhart. The museum has the potential to become an anchor point of tourism, in the way that the Nimitz Museum in Fredericksburg is a hub of the downtown district there.”
Gene Galbraith – McGregor’s father – keeps the museum going. The clock repair guru manages the museum, which is open weekends and other days of the week by appointment.
“Every night when I go to bed I pray,” said Gene, laughing. “That said, it’s been a community effort with special commendation to our hard-working board of directors. The museum is a labor of love for the science and art of horology, and we hope at the same time, a gift to Lockhart.”