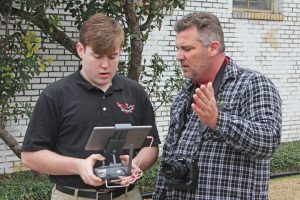 Austin Collier, left, and Chris Collier of Ascension Media pilot a drone over downtown Lockhart during Hot Rods and Hatters.

The bird’s-eye view of Lockhart during Hot Rods and Hatters we displayed on today’s front page came courtesy of Chris and Austin Collier, the father-son duo behind Ascension Media & Drone Services.
Chris, the father in the duo, has combined his knowledge of gadgetry, programming, photography and video-editing with Austin’s natural ability as a drone pilot to provide services that include shooting commercials and home listings for real estate agencies.
You’ve likely seen video footage from drones in every day commercials. Their portability and relative user-friendliness has led to them becoming an increasingly popular choice over the more traditional boom lift for high-vantage-point shots.
Chris and his wife, Leslie, owned and operated the Lockhart Little Caesar’s for years before deciding to sell the restaurant and open Ascension Media.
“At 46, I needed to decide what I wanted to be when I grew up,” said Chris, who has shot and edited video for years, including shooting and editing a public access show about the Bastrop Zoo and its owner.
“I’ve always liked taking beautiful shots, but for me, it’s always been about where the camera can take me,” Chris said.
In addition to photography and video work, Ascension is also going to offer tutorials and training likely beginning in March, Chris said, including helping users get the certification necessary for compliance with the Federal Aviation Administration.
“YouTube videos really can’t give you the same thing,” Chris laughed.
Chris said the business also gave him the opportunity to continue doing something he’s passionate about: employing young people and teaching them a trade.
“I’m committed to that,” he said. “At Little Caesar’s, I had the pleasure of teaching people some of the things you learn at your first job – how to show up to work on time, how to get along with others, that kind of thing – but with Ascension, I can teach them something more valuable than how to put a pizza on a conveyor belt.”
For more info about Ascension Media & Drone Services, visit ascensionmediaonline.com.