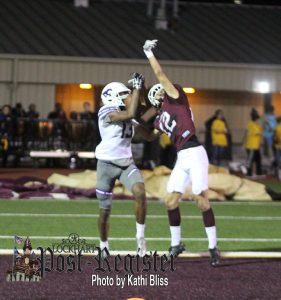 Players in the Lockhart High School football program will face different district opponents than the basketball and volleyball teams will when they suit up for the 2018 season.
The latest University Interscholastic League realignment, which runs through 2020, pits Lockhart against Boerne Champion, Castroville Medina Valley, Kerrville Tivy, Alamo Heights, San Antonio Kennedy, San Antonio Memorial and Uvalde in District 14-5A, Division 2.
The 2018 season marks the first for splitting 5A into two divisions in football. As a smaller school, Lockhart will play in division 2 in football against opponents with similar enrollment numbers.
Most of the road games require a trip of 90 minutes or fewer with the exception of Uvalde, which can be about a three-hour bus ride.
In football, the Lions finished 3-7 last season in district play.
“This keeps us more competitive in terms of enrollment,” said Lockhart head football coach Brian Herman. “It’s never going to be exactly what we want, but we’re familiar with some of these opponents and we’re looking forward to the season.”
Herman said the district would coordinate with Uvalde to make sure they alternated home and away games for varsity and JV, which play on different nights.
“If we can do that, it will save us about six hours a week traveling,” Herman said.
Division 1 and 2 didn’t apply to volleyball and basketball – sports that traditionally require fewer students to field a team, meaning depth isn’t as much of an issue.
Lockhart will play in District 25-5A in basketball and volleyball. Its opponents in those sports include Austin Crockett, Austin Johnson, Austin Lanier, Austin McCallum, Austin Reagan, Austin Travis and Dripping Springs.
Lockhart Athletic Director Sheila Henderson said she was happy with how the UIL handled basketball and volleyball because it would necessitate less travel during the week, but wished they had handled football the same way.
In basketball and volleyball, district games are usually played on Tuesdays and Fridays.
“I’m happy with that because it’s good from an academic standpoint,” Henderson said. “It puts us back in the classroom during the week.”