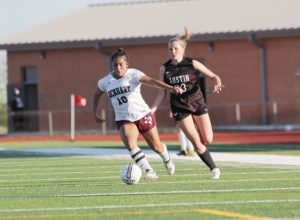 A hard-fought first-round playoff game against top-seeded Austin High was also the final contest of the season for the Lockhart Lady Lions, whose season came to an end in a 3-1 home loss.
Austin High scored first, taking the lead for good with 12 minutes to play in the first half and expanded its lead to 3-0 before senior standout Lexi Deleon scored a goal in the 65th minute.
Lockhart girls soccer coach Aaron Fichera acknowledged his team had a number of chances to score, but gave the Maroons credit for their accuracy.
“It was a hard-fought match and we had plenty of chances in front of the goal,” Fichera said. “However, the other team was able to capitalize on their chances. Austin’s midfield did an outstanding job and made their back line’s job a lot easier.”
The coach said there was reason to be hopeful for next season and anticipated his team would have a shot to build on a year where they went 7-6-1 in district play.
“We are losing three seniors, but the main core of the team are sophomores and juniors,” Fichera noted. “We are going into a less competitive district, due to the realignment, and we should do very well.”