They’ve gone country: Lockhart Chamber of Commerce goes ‘back to its boots’ 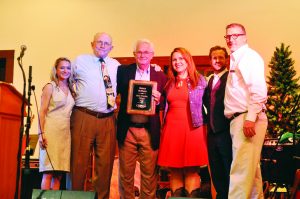 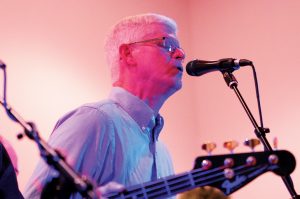 Photo by Adrian Gutierrez / Courtesy of Lockhart Chamber of Commerce
Brad Westmoreland, Lockhart City Councilmember and owner of Westy’s Pharmacy in downtown Lockhart, belts out a tune Saturday night at the Back to Our Boots Chamber of Commerce annual banquet. Westmoreland reprised his former role as lead singer of local band Diamondback, which performed regularly in the 1970s.

Blame it all on their roots: They showed up in boots.
But it wasn’t a black-tie affair Saturday night at the Dale Community Center, where the Lockhart Chamber of Commerce held its 83rd annual banquet. With the theme “Back to our Boots,” jeans and cowboy boots definitely met the sartorial standard.
It was all part of an effort to bring the event that has, in recent years, been held in San Marcos back to Caldwell County, said 2018 Lockhart Chamber of Commerce Chair Donald Schneider.
“Everyone has been saying they wanted to see everything be local,” Schneider said as he addressed a packed gymnasium where guests eagerly chowed down on fajitas, bacon-wrapped chicken, rice and beans. “So we did. We’re at a local venue with local food and local entertainment. That’s why we brought it back here to Dale.” Beverages were provided by Bevvies Fine Wine and Spirits, and the buffet was prepared by Eric DeHoyos.
The event served as a sort-of reunion tour for local 1970s country act Diamondback, headed on vocals by Westy’s Pharmacy owner and Lockhart City Councilmember Brad Westmoreland, who performed a catalogue of hits from the 1970s, 1980s and 1990s as folks twirled and two-stepped on the gym floor.
Lockhart ISD Superintendent Susan Bohn and Lockhart mayor Lew White gave brief progress reports, and White took the opportunity to honor retiring City Manager Vance Rodgers.
“Vance is a one-in-a-million person,” White said. “It has been an honor to know him and work with him, and I wish him well in all his future endeavors.”
For many, it was their first opportunity to meet new Lockhart Chamber of Commerce director Christie Pruitt, who said she is renting a home while she waits for her husband and children to join her in town.
“My husband called a couple of hours ago and asked if I liked the people and liked the town,” Pruitt told the crowd. “I told him that these people are the warmest, nicest people you’ll ever meet.”
Prior to Diamondback’s taking the stage, the Chamber gave out some awards.
Benny Hilburn earned the Most Worthy Citizen Award. 2017 Business of the Year went to Hometown Cinemas, and Caldwell County Farm and Ranch earned Agribusiness of the Year.
Earning spirit awards were Westmoreland, Lockhart Animal Shelter and Seton Care-A-Van volunteer Amy Velvin.

Schools not in danger of closing due ...