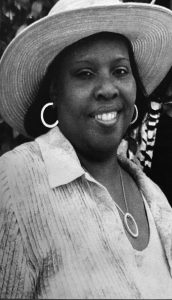 On July 26, 2018, Tracey Sharmane Adams passed away at the age of 49. She was an incredible woman, aunt, singer and caretaker.
Tracey was born November 5, 1968 in Seguin. Along with her seven siblings, she was very popular and active in the Lockhart community throughout her teenage years. In 1988, Tracey moved to Washington, DC to assist her older sister Renae Ngati with her first-born son. Tracey spent the next 19 years of her life as a caretaker and stylist. Tracey served as a youth coordinator and ultimately a musical director at the Silver Spring Presbyterian Church. Much of her time was spent organizing church plays and musicals, while also performing as a solo singer during Sunday services.
In 2007, Tracey moved to Florida to spend time with her younger brothers David and Harold Adams. In Florida, she assisted in youth support as David and Harold coached varsity football at Westlake Preparatory School & Academy. Tracey moved back home to Texas in 2009 living in Austin. She joined Greater Calvary Bible Church in January 2009 establishing a new home under Reverend Sterling Lands II.
Unfortunately, Tracey suffered a severe stroke which rendered the entire right side of her body function less. She moved to Magnolia Nursing home in Luling, TX for rehabilitation purposes. Even though Tracey required full living assistance for the rest of her life she made the most of each and every day. Her infectious personality was on full display for every nurse and fellow patient that came across her path. Tracey’s incredible personality rose so big in the community that she was named an honorary Luling Thump Queen in 2012. Tracey returned home to Lockhart, TX in 2017 to continue her rehab and treatment at Parkview Nursing and Rehab.
Tracey blessed everyone she knew with a mixture of comedy, sass, love and genuine joyfulness.
Tracey is survived by her two nephews who she helped raise, Steven and Bryan Ngati; her parents, Virgil and Nannie Taylor Jr; her brothers, Art and David; her sisters, Renae, Deborah, Sandra and Tommy Shay. Tracey has gone home to continue to serve under her savior Jesus Christ, while getting the opportunity to see her mother Helen Louise Adams and her younger brother Harold Darnell Adams who passed away in 2014 at the age of 42.
There will be a funeral service for Tracey on Saturday August 4th, 2018 at the First Lockhart Baptist Church, 315 Prairie Lea, at 10:30 am. Viewing will be from 8-10 am. Service will be officiated by Greater Calvary Bible Church of Austin, TX. Burial will be at Nash Creek #2 Cemetery.
Arrangements are under the care and guidance of McCurdy Funeral Home.
To view and sign the guestbook, visit www.post-register.com/obituaries/Tracy-Sharmane-Adams