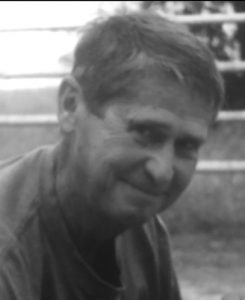 Wallace Leon Denby of New Braunfels, Texas passed away peacefully in his home on August 20, 2018 at the age of 70 with his family by his side. He was born on December 14, 1947 to Elrine Hilda Hoese and Orlan Denby in Seguin, Texas.
Following graduation from New Braunfels High School he joined the Marine Corp and completed two tours of duty in Vietnam. He returned home and married his loving wife of 48 years, Therisa Hinman Denby. They were blessed with three wonderful children, Genifer Rucker (Guy) of Mathis, TX, Lori Anne Reid (Jeffery) of Atlanta, GA and Jason A. Denby of Washington, DC.
Wally was the last employee hired at the Comal LCRA Plant and was transferred to Austin after the plant closed. He and his family spent most of their lives in Lockhart, TX. He retired from LCRA after 42 years. After returning to New Braunfels he centered his life on family, creating a beautiful yard and making the best barbeque ribs around. His greatest pride was being PaPa to his amazing grandchildren Haley and Gus Rucker.
Wally is preceded in death by his mother, Elrine Gulley and mother and father-in-law Helen and Homer Hinman. He is also survived by his brothers, James D. Denby and Joe C. Denby (Terri), sister-in-law Sandy Dyer (Ron), brother-in-law Gerald Hinman (Cathy). Also, nieces and nephews Beverly Denby-Wiley, Kathleen Porter, Ben Dyer, Sarah Dyer, Stacy Barth, William Hinman, and Travis Hinman.
Services were held at Doeppenschmidt Funeral Home in New Braunfels, TX on Saturday, August 25, 2018 at 10:00 AM. Memorials may be made to Hope Hospice or the charity of your choice.
To view and sign the guestbook, visit www.post-register.com/obituaries/Wallace-Leon-Denby