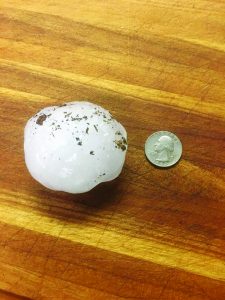 Hail larger than golf balls was reported in Caldwell County on Sunday, where county officials said at least two cows and a calf died in the icy barrage that swept through the area. Delhi is believed to have sustained the worst of the damage. Contributed by Caldwell County Office of Emergency Management

A weather system that swept through Caldwell County on Sunday brought large hail that left two cows and a calf dead in the Delhi area, county officials reported.
The hailstorm impacted several areas within Caldwell County, the Caldwell County Office of Emergency Management reported, but the office said the most damage seemed to be around Delhi, where livestock deaths were reported.
At the time of this report, three official livestock deaths had been tallied in a storm that brought hail up to baseball size, county officials said. Damage was reported to skylights, roofs and vehicles.
Delhi area residents shared photos and videos of the hail and the storm. Some photos depicted serious damage to windows, while others showed pieces of hail that were several times larger than a quarter.
“A new (Caldwell County) constable vehicle sustained several dents and a broken windshield,” said Caldwell County Office of Emergency Management Chief Martin Ritchey. “There were a number of others damaged. Hail was coming down for a long time.”
The office shared a link to USDA disaster relief programs for those who sustained damages on its Facebook page.
To find out how the USDA can assist, visit https://www.fsa.usda.gov/programs-and-services/disaster-assistance-program/index
To be eligible for USDA disaster assistance programs under the 2014 Farm Bill, producers are no longer required to purchase crop insurance or NAP coverage, which was the risk management purchase mandate under the 2008 Farm Bill.