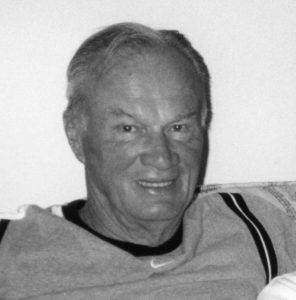 Colonel Henry E. “Pete” Clements (United States Air Force, Retired), 92, of Baltimore, Maryland and McMahan, Texas passed away on August 10, 2018. Pete retired from the National Aeronautical and Space Administration (NASA) in 1992 after both US Air Force and civilian service tours of duty supporting NASA at the Johnson Space Center, NASA Headquarters, and the Kennedy Space Center. “Prince Henry” was a consummate “horse holder,” serving as Technical Assistant Director at the Johnson Space Center, Executive Officer to the NASA Administrator, and NASA Liaison to the Unified Space Command in Colorado Springs among other positions throughout the years. He served more than 27 years in the military, beginning in the US Marine Corps, then attending The United States Military Academy, and finally selecting the US Air Force upon graduation. He was well known for his wit and sense of humor, which he demonstrated to the very end of his days.
He was preceded in his passing by his wife, Vivian, in 2004. He is survived by his two daughters, Daryl Plevy, her two children Jessica Plunkett and Joshua Plevy; and Jill Clements and her three children, TJ, Alyson and Travis Thompson; and his son, Jay Clements and his wife Cathy.
Colonel Clements will be interred in the fall at the Old Cadet Chapel Columbarium at West Point alongside his wife. Donations in his name may be made to: The Baltimore Polytechnic Institute Foundation, 1400 W. Cold Spring Lane, Baltimore, MD 21209.
To view and sign the guestbook, visit www.post-register.com/obituaries/Henry-E-Pete-Clements