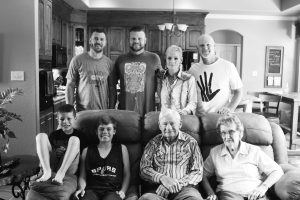 Herbert E. Hale, 90, of Lockhart, Texas passed away on April 1, 2018. He was born to James D. and Dixie Hale on June 9, 1927 in Kempner, Texas.
At eighteen he enlisted in the U. S. Navy Seabee’s and served his country overseas during World War II.
He then decided on a career in law enforcement and joined the Texas Department of Public Safety Highway Patrol with his first duty station being in Del Rio, Texas where he met and married his wife of 67 years, Catherine Garoni. After being stationed in Boerne and San Antonio, he was promoted to Lieutenant and they moved to Corpus Christi where he remained until retiring after 34 years with the DPS. He then became a member of the prestigious Quarter Century Club.
While working for DPS, he and Catherine purchased a small cattle ranch outside of Lockhart and following his retirement, after building a home, they moved to the ranch where he began the second phase of his life, his lifelong dream of breeding and raising cattle. He also enjoyed his rather large garden, sharing it with friends & family, and his fruit trees. He loved life, was a staunch Republican, believed in hard work and at 90, could be seen with his walker strapped to his tractor on his way to go bale his hay. He had a great sense of humor, especially Ace Reid comics, never tired of watching John Wayne movies, was always quick to help a friend, and had a big and generous heart. He will be greatly missed by his family, friends, and all who knew him.
He is survived by his wife, Catherine; daughter, Barbara; son, Dennis and wife, Jenny; two grandsons, Clint and Cody; two great-grandsons, Peyton and Noah and one great-granddaughter Lilah, expected to bring joy to the family in June; his brother, Floyd Hale and two sisters, Thelma Phillips and Mary Hale.
A Mass of Christian Burial will be held at St Mary’s Catholic Church on Wednesday, April 11th beginning at 10 am. Interment will follow at Memory Lawn Memorial Park.
Arrangements under the care and guidance of McCurdy Funeral Home, 105 E. Pecan, Lockhart, Texas 78644.
To view and sign the guestbook, visit http://post-register.com/obituaries/Herbert-E-Hale