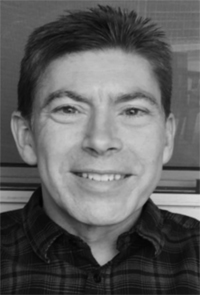 Blake Lynn Anderson, age 48, died on February 6, 2018 at home in Lockhart, Texas with his Mother and Brother at his side. He put up a valiant fight after being diagnosed with metastatic cancer in Dec 2016. He endured every possible treatment without a complaint and with a hopeful, positive attitude. His friends and family are proud of the way he faced such adversity.
As per his wishes, Blake was cremated and a Celebration Of His Life will be held in Lockhart on a warm sunny day probably in April. The date and time will be announced later.
As organized and efficient as he always was, Blake wrote the following as his Biography and Obituary. It is a great description of his life, interests and positive attitude.
Written by Blake
Anderson
Blake Anderson was born on April 30th, 1969 at Seton Hospital in Austin. He was the second son of Terry and Dorothy Anderson and younger brother to Brett.
He spent his early childhood in Austin and the family moved to Lockhart when Blake was 8. The family purchased some land out in the country south of Lockhart and built a new house. Blake had a fun-filled childhood with lots of hunting, fishing and exploring the wilderness. There was also lots of swimming, bike riding, sports and family fun. Growing up in the country was a great experience and brought the family close together.
Throughout his youth Blake loved playing football and basketball. He was also loved music and drawing. Growing up in the country, his parents taught him the value of hard work. He had plenty of chores at home and held part-time jobs throughout his teens. Despite his busy schedule, he always made straight A’s in school.
Blake enjoyed growing up in Lockhart because it was small enough that you knew everyone in your class at school. He had lots of friends and got along well with everyone. He was independent and rebellious, but he always tried to make his parents proud.
Blake graduated from Lockhart High School in 1987 and attended the University of Texas at Austin. He graduated from UT with honors in 1991 with a degree in Advertising and Art.
After graduation, he decided to move to Los Angeles. He didn’t have a job lined up and didn’t know anyone in LA, but he was determined to make it on his own.
A few months later, his brother Brett joined him and they spent their early 20’s together living in Los Angeles. They had great times together, making new friends, hanging out at the beach and partying in Hollywood.
There was never a dull moment in LA in the 90s. He lived through the LA riots, the Northridge earthquake and the OJ Simpson chase.
During the Internet boom of the 90’s, Blake starting working in Information Technology. He worked his way up the ladder at a large consulting firm in downtown LA. He eventually tired of the corporate world, and took a job with a startup company owned by a friend.
After 13 fun-filled years in LA, he decided to move closer to home. He settled on Dallas – once again, he didn’t have a job or friends in Dallas, but it was close enough to Austin and had a decent job market. He got a job working in IT for a large corporation. Now that he was back in Texas he made regular trips to Austin and Lockhart. He quickly realized that Austin was way more fun than Dallas and decided to move back home.
Rather than quit his job and start over again, he convinced his employer to let him work from home. He bought a condo on Town Lake and moved backed to Austin, where he could not have been happier.
Blake loved to travel and explore the world. He traveled throughout Europe, including London, Paris, Madrid, Barcelona and Amsterdam. He also made trips to Italy, Germany and the Czech Republic.
He made many trips to Hawaii and Mexico, and spent vacations in Costa Rica, Peru, Belize and Brazil.
Blake loved to run on the trail around Town Lake and would often run up to 20 miles per week. He was a huge music fan who attended hundreds of live concerts and music festivals throughout the US. He loved to read books and read hundreds of books throughout his life.
Although he died too early Blake lived a rich life full of good times and great memories. He accomplished everything he set out to do and traveled everywhere he wanted to go. He got everything out of life he wanted and had no regrets, other than leaving his family and friends too early.
Blake had a large extended family and loved visiting with all his aunts, uncles and cousins. He had many close friends and loved hanging out with them in Austin, Lockhart and around the world.
He was predeceased by his father, Terry Anderson and leaves behind his mother, Dorothy and his brother, Brett. They provided great love and support to him throughout his life, especially near the end. He would like to thank them and all his family and friends for their continued love and support.
Any donations in his memory should be made to the charity of your choice.
To view and sign the guestbook, visit https://post-register.com/obituaries/
Blake-Anderson