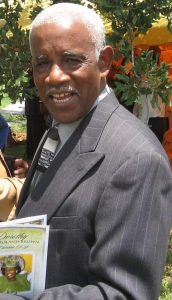 Holland August Brown Jr., affectionately known as “Buck” was born on October 20, 1954 in Travis County Texas to the late Harlen and Dorothy Brown. He was the oldest of five children born to this union. Buck professed Christ at an early age and united with St. Mark United Methodist Church. He later united with First Baptist Church and was baptized under the leadership of Pastor L.M. Roberts.
Buck was known for his ability to carry on a conversation with ANYONE…about ANYTHING! There was no topic that Buck did not have an opinion about. Buck had a great love for family and friends and he could be found at any reunion or gathering laughing and talking with everyone.
Buck graduated from Lockhart High School in 1973, and continued his education at Blinn Jr college in Brenham, TX. He became a carpenter by trade and continued in that profession until his untimely death. Buck was preceded in death by his parents Harlen and Dorothy and his 3 brothers: Phillip, Michael and Berry Brown.
Buck leaves to cherish his loving memory one son Anthony L. Brown of Austin, Texas; four daughters, Hollandria (Corey) Anderson, Sherronda (Onelsora) Brown, and Destinee Brown all of Austin, Texas and Ayanna Pearson of Lockhart, Texas. 5 grandsons: Giavante, Zahshorn, Jahlen, Jehren and Dhimari and one great granddaughter, JaNiyah all of Austin, Texas.
He also leaves to cherish his memory one sister, Ione Brown Johnson of Lockhart, Texas. Two nieces Berneada Brown Jeter and Edwina Brown; two nephews, Cedrick and Jared Brown; special friend Karla Spencer, and a host of other relatives and friends too numerous to name.
Family received friends at 10:00 am, Monday, April 16, 2018 at McCurdy Funeral Home, with services following at 11:00 am. Interment followed at Dale Memorial Cemetery.
Arrangements under the care and guidance of McCurdy Funeral Home, 105 E. Pecan, Lockhart, Texas 78644.
To view and sign the guestbook, visit www.post-register.com/obituaries/Holland-August-Brown-jr