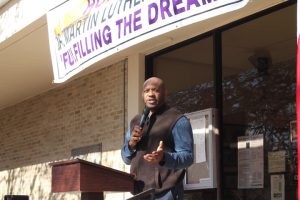 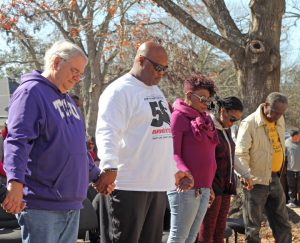 Since 2004, Lockhart has annually held a parade on Martin Luther King Jr.’s birthday to commemorate the activist’s push for equality during the civil rights movement in the 1960s.
Monday marked the 15th year since the march began in the Caldwell County seat. Hundreds gathered on Carver Street just before 10 a.m. and began a march through the city’s roadways that ended at Lockhart City Hall, where citizens gathered to remember King’s timeless message of equality and brotherhood.
Lockhart’s annual MLK tradition was started by the late Kenny Roland, whose wife, Cathy, and daughter, Kennedy, were participating in the ceremonies.
“It’s grown every year,” said Cathy Roland as she passed out programs to marchers as they arrived in the parking lot. “Last year, I think we had about 300 participants. We hope to see it continue to grow.”
Participating in the parade were students of all ages who attend Lockhart ISD schools. The Lockhart High School marching band provided musical accompaniment for the marchers.
“I love that Lockhart High School, the band, the cheerleaders, all of them are involved,” Cathy Roland said. “(Athletic Director) Sheila Henderson has been instrumental in getting the kids involved.”
Kenny Roland passed away in 2015, just a few days after that year’s MLK parade. His daughter marched with a banner that celebrated her father’s memory. As the program began, Kennedy released a lone purple balloon to remember her dad.
The balloon got caught in a tree before wriggling loose and floating skyward.
“I guess Kenny wanted to stick around a little longer today,” quipped emcee Frank Gomillion, who said he’d been close to Roland.
Representatives from different area churches took the mic during the ceremony. First Christian Pastor Steve Digby opened with a prayer and St. Mark pastor Mae Fletcher led everyone in song before keynote speaker Dr. Kelvin Kelly took the stage.
Kelly, an associate professor of practical theology at Hardin-Simmons University, echoed King’s famous message of equality, and spoke about the importance of spreading that message to younger and future generations.
Namely, he mentioned the importance of simply being kind to others and refraining from passing judgment.
“People need to learn to treat others as well as we ourselves would like to be treated,” Kelly said. “It’s the greatest gift that’s been given to each of us. You see it when you hold a door for someone or, when someone has dropped something on the floor, when you pick it up for them. It’s there, but really, it’s been minimized. It’s shrunk to such a small portion of who we are.
“People look at your clothing. They look at what car you drive. They look at whether you’re carrying a briefcase or a backpack. And (to them) that defines your worth. “
Kelly said that sort of discrimination was similar to what King spoke out against.
“He was seen as a troublemaker,” Kelly said. “He was seen as someone who wouldn’t just stay in his place. They wanted to keep the peace … but a peace that victimizes humanity is no peace at all.”
Kelly said people needed to look ahead to the future rather than dwelling on the past.
“Look into the eyes of a child,” he said. “The future is tied up in them. We have a responsibility to them. The most important thing we can do in our life is caring for a child.”