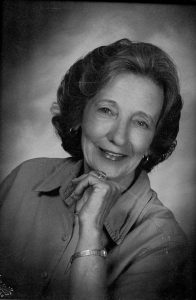 “Mit” as her Louisiana family called her was born on January 20, 1931 in Alexandria to Louis Heard Melder and Aurilla Frances “Rill” Andries. She had one older sister, five brothers: two older and three younger, and two infant sisters who each died at 2. She loved books and learning from an early age and after following her big brothers to school for a year, her mother told the teacher she was 6 and she was allowed to start first grade a year early. Mildred graduated Salutatorian of her Oak Hill High Senior Class at 17. She asked her dad if she could ride with friends to Houston, stay with them, and see about getting a job and he said yes. She began her adult life working for Houston Lighting and Power.
In Houston, she met the love of her life, Pat Bethany. They were married March 18, 1949 and soon had three boys. After living in Houston, Beeville, Edna, and Luling, the couple settled in Lockhart, Texas. Driving to Austin, Mildred continued working and got a job at the IRS where she worked until she retired. She was still proud of her State Insurance and that she was smart enough to keep that.
Mildred was an avid gardener and loved to cook. There was always something homemade to eat in the kitchen. She grew pecans, blueberries, tomatoes, greens, potatoes, strawberries, and flowers, flowers, flowers!
She was a member of the Catholic Church. She loved her family and friends. She was that one of a kind grandma that put special memories in each of our hearts: sewing together, gardening, camping, swimming, cooking, canning, and picking up pecans
Mildred passed from this life peacefully on the evening of March 15, 2018 in Port Lavaca, Texas.
She was preceded in death by her parents, her husband, brothers: Locklin and Leon; and sisters: Marie, Mary, and Margorette.
She is survived by three brothers: Landus, Leo (Diane), and Larry Melder; one sister in law, Doretha Melder; her three sons: Michael (Marites), Paul (Jeana), and Stephen; 14 grandchildren: Charles (Danette), Michele Smith (Justin), Laura Ruple (Eric), Travis, Robin, Patrick, Bonnie, Kirt, Mazal, Emet, Stephen, Mystery, Christopher, and Bryan; 14 great grandchildren: Beau, Aerlin, Dillon, Kaden, Kylee, Ashley, Alyssa, Ethan, Austin, Gracie, Noah, Elizabeth, Jack, and Zayla.
Visitation will be held Monday, March 19, 2018 from 8:30am to 10am at St. Peters Catholic Church, Elmer, LA followed by a Rosary at 10am and the Funeral Mass beginning at 11am. Burial will take place in St. Peter’s Cemetery. A Memorial Service will be held at a later date at St. John’s Catholic Church in Luling.
Special Thanks to: Dr. Mark Clark, Austin, TX and Dr. Paul Bunnell and the Memorial Medical Staff in Port Lavaca, TX who cared for Mom in her final days.
Memorial donations may be made to St. John’s Catholic Church, 500 E. Travis, Luling, TX 78648 or Circle of Friends, c/o St. Peter’s Catholic Church, 6684 LA 112,