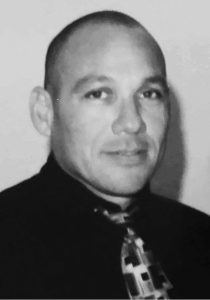 Our beloved Ronald (Ronnie) was called to heaven by our Lord and into the arms of his loving grandparents Lupe and Concha Riojas in the early morning of March 3, 2018 after a long courageous battle with Multiple Myeloma at age 62. He is survived by his parents Theresa and Genaro Ybarra of Lockhart, TX. His sister Jackie and husband Steven Franco of Georgetown, TX  nieces Alexandria Mitchell, husband Brian, Angela and Alyssa Franco. Brother Terry and wife Celeste of Kyle, TX, step-children Lindsey, Thomas, Noah, Brother Marty Ybarra, of San Marcos, TX nephew Christopher, nieces Ashley and Tori Ybarra
Ron was born March 31, 1955 in Lockhart, TX. He enjoyed playing his saxophone in High School Band. He was strong, kind and loving with a big heart to help anyone in need. Ron was an excellent dresser, loved to dance and won a few contests during the disco days and had a beautiful baritone singing voice; also had some culinary training and made some amazing meals. Most of all he loved to travel.
At the age of 17 he joined the Army earned his GED and surpassed Military Schooling and Assignments to become an Airborne Ranger earning the National Defense Service Medal; Ranger Tab; Pathfinder Badge; Parachutist Badge.  He was picked as an Honor Guard to stand by President Johnson’s casket at the LBJ Library.  After leaving the military he enrolled at Southwest Texas State University and graduated with a BS in Economics in 1980. After working numerous jobs and also trying his hand at starting his own business Ron ended up in Las Vegas working for the Wynn Hotel and Casino Corporation and rising up the ladder for 18 years then opportunity came knocking again with an offer to train people in Singapore for the Wynn Corporation who were building a new hotel and casino. Ron fell in love with Singapore and Thailand; the people, the country, food, and weather. After years of living overseas with no plans to leave paradise he collapsed and was paralyzed only for doctors in Singapore to discover he had terminal cancer.  Doctors removed what tumors they could and with long months of rehab he learned to walk again.  His doctors said he would have to return to the United States for treatment that would prolong his life and God blessed him with 5 more years.  Even in extreme pain he would smile and was thankful for everyday he opened his eyes. Many of his friends and colleagues have reach out from United States and Asia to express how much he was loved and would be missed and would always be in their prayers.
Funeral Mass will be held on Thursday, April 12, 2018 at 1:30pm at St. Helen’s Catholic Church, 2700 E. University Ave. Georgetown, TX 78626. Followed by burial at Our Lady of the Rosary Cemetery & Prayer Gardens, 330 Berry Lane, Georgetown, TX 78626.
To view and sign the guestbook, visit https://post-register.com/obituaries/Ronald-Eugene-Ybarra

City-wide clean up begins April 4 in ...