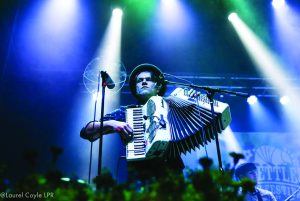 Martin Wenk regales the crowd with an accordion riff during one of Calexico’s sets over the weekend. Calexico is a Tucson, Arizona-based Americana, Tex-Mex indie rock band that combines sounds from a number of genres.

Visitors came from all over to visit Caldwell County for the Old Settler’s Music Festival, which rocked Tilmon for four straight days with a formidable slate of bands from nearly every genre imaginable.
Guests visited from far and wide, traveling all the way from places such as Atlanta and the northeast to attend the music festival, staying in hotels, bed and breakfasts and in vacation rentals, according to area innkeepers.
Lockhart, Luling and areas in between all seemed to benefit from the festival, according to area officials who visited with their constituents.
“I went out to Old Settler’s this weekend,” Caldwell County Commissioner Eddie Moses said during commissioners’ comments Monday at the courthouse. “It was a really good deal for Caldwell County. Everyone I talked to out there said they had a great time.
“It was a good shot in the arm for the area. The LaQuinta in Luling rented 140-something rooms out over the weekend, and the bed and breakfast out there was full also for all four days. It helps out our economy … it really does.”