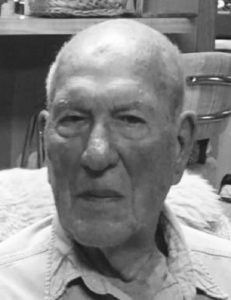 Harold Henry Haecker of Lockhart passed away peacefully on June 5, 2018 at the age of 98. He was born on November 12, 1919 in San Antonio, Texas to Edgar Haecker and Amelia Semlinger Haecker and was the second of three boys. His older brother, Edward, and his younger brother, Ollie, both preceded him in death.
In 1942, Harold joined the Army Air Force and was a radio operator during World War II. He had orders to join the fighting in the Pacific that were cancelled on the day that the atomic bomb was dropped ending World War II. He was honorably discharged in 1945 having served most of his duty at Gary Air Force Base.
On March 3, 1943, Harold married the love of his life, Nola Marie Friesenhahn and they enjoyed 68 years of marriage until Nola’s death. Following his military service, Harold learned the plumbing trade and eventually became a Master Plumber. Harold and Nola both worked for Grimsinger Plumbing Company until the retirement of Martin and Thelma Grimsinger. On October 1, 1965, Harold and Nola purchased the business and changed the name to Grimsinger-Haecker Plumbing Company. They successfully operated the business together until their retirement in 1985. Following their retirement, Harold became the Plumbing Inspector for the City of Alamo Heights and enjoyed investing in real estate with his brother-in-law, Milton Friesenthahn.
Harold and Nola were blessed with two children, Beverly Jean and Jerry Edward. They had a very close circle of friends, many of whom knew each other prior to their marriages and whom they remained close to all of their lives. Harold and Nola enjoyed travelling with friends and family and also loved to bowl, play bunco and go dancing with their friends. They enjoyed a very rich and full life together.
Nola passed away on January 16, 2011 and Harold moved to Lockhart to live with his daughter and son-in-law, Roger Haug, who became his best friend and primary caregiver. He enjoyed gardening and canning with Roger and visiting with friends who would stop by. He loved to talk, never met a stranger and was always curious about everyone.
He is survived by his daughter and son-in-law, Beverly and Roger Haug and his son, Jerry Haecker and his wife, Belinda, of Sun City. He is also survived by Beverly’s children, Laurie and Patrick Davis of Lockhart and their daughters, Alyssa, Marilyn Jean, Jodi and Sydney as well as Travis and Monica Haug of Victoria and their children, Hunter, Hannah and Haylee. He is survived by Jerry’s children, Adam and Michelle Haecker and their son, Henry, of Oklahoma City, Ryan Haecker or Cambridge, England and Amanda Haecker of Seattle, Washington. In addition, he is survived by his brother-in-law, Milton Friesenhahn and his wife Billie of Schertz as well as six nieces and one nephew. He will be greatly missed by all of us.
The memorial mass will take place at 10 a.m.. on Friday, June 15, 2018 at St. John’s Catholic Church, 500 East Travis Street, Luling, Texas with a luncheon to follow in the parish hall. Internment will take place at 3 p.m. at Holy Cross Cemetery Mausoleum in San Antonio with Father Howard Goertz officiating at each service.
Harold’s family would especially like to thank Gene and Sue Crouch for their assistance and support as well as Doctors Arjun and Renu Mohandas, Father Howard Goertz and Laurie Davis for the love and care they gave to Harold. The family also very much appreciates the loving way that he was cared for during the last month of his life by the staff of Chisholm Trail Nursing Center.
The family requests that anyone desiring to pay tribute to Harold make a contribution to St. John’s Catholic Church or the charity of your choice. We sincerely appreciate the outpouring of love and support from our family and friends during this last month.
To view and sign the guestbook, visit www.post-register.com/obituaries/Harold-Henry-Haecker