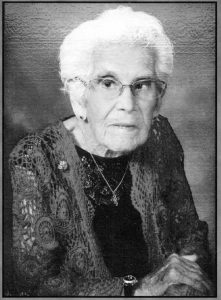 Baby Josefina Castañeda was born in Candelas, Coahuila, Mexico to Macario Castañeda and Luciana Davila on Monday, February 4, 1918. At her very young age, Josefina’s family moved to Concepcion Del Oro, Zacatecas, Mexico where her father became a miner in the rich gold mines west of the city. For several years the family lived nearby in housing provided by the mining company. Shortly after Don Macario’s death in the late 1930’s, the family – Josefina, one sister, one brother and Doña Luciana – moved to Monterey, Nuevo Leon, Mexico in search of a better life. There, in 1942, ]osefina met Pedro Diaz, who himself had been a miner in Zacatecas, and they became, before God’s glory, husband and wife.
In 1944, they then emigrated to the United States where Don Pedro, now a skilled shoemaker, became a bootmaker for the nationally renowned “Rios Brothers Boot Co.” in Raymondville, Texas. There, Josefina gave birth to her eldest son, Pedro, ]r. in July, 1946.
Thereafter, in 1948, the blossoming family of Doña Josefina and Don Pedro moved to the Rio Grande Valley of South Texas. Highly skilled in his craft, Don Pedro acquired his own business, a shoe shop in Rio Hondo, Texas. As ever a loving and faithful wife, there Josefina became the ever nurturing mother of seven children, Pedro, Jr., Maria de Lourdes, ]uan Miguel, Martiniano (Tito),Yolanda, Raul and Maria Candelaria. Josefina’s ever pleasant personality and her faithfulness as a wife and mother earned her high esteem in Rio Hondo, Texas, that has persisted to this very day. On her visits, she is showered with love, honor and respect by all who desire her attention.
Seeking a better life for Josefina and now grown family, Don Pedro moved his family to Austin, Texas, in 1968 where he re‐started his shoe business. With the help of Josefina and one son, Raul, Don Pedro’s business quickly flourished. Sadly, the year 1972, was to be the most tragic in Josefina’s life. Don Pedro, age 70, died suddenly in May and Raul, her most beloved son, 16, died six months later in a car accident. Sorrowfully to this day, Josefina, still morns the loss of both, her husband and young son.
The Diaz family, under the guidance of the ever loving Josefina continues to thrive in Austin, Texas. Josefina’s life – with Don Pedro’s heavenly praise – has been filled with joy and abounding family love; her children continuously seek her motherly affection and wisdom, and rightly so. Tirelessly nurturing her family as a mother should, Josefina has led a toiling and hard, though, caring life, all for the love of her children, 15 grandchildren, 38 great grandchildren and 5 great-great grandchildren. God’s great glory is ever before Josefina through her endless faith and prayers. He stills blesses the Diaz family with her loving presence.
“She watches over the affairs of her household and does not eat the bread of idleness. Her children arise and call her blessed; her husband also, and praises her. Many women do noble things, but you surpass them all.” Proverbs 31:27‐29
Visitation began Sunday, August 26, 2018 at 4:00 p.m. at DeLeon Funeral Home.
Recitation of the rosary was at 7:00 p.m. Sunday, Aug. 26, 2018. Funeral mass was celebrated at 10:00 a.m. Monday, Aug. 27, 2018, at St. Mary’s Catholic Church in Lockhart. Burial followed in Assumption Cemetery in Austin, Texas.
To view and sign the guestbook, visit www.post-register.com/obituaries/Josefina-Diaz