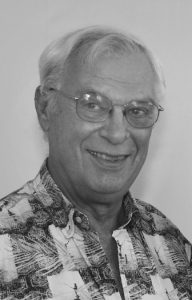 Bill Petersen of Martindale, Texas, passed away on Monday, July 9, 2018, at the age of 78. Born in Hartford, Connecticut on October 8, 1938, he was the son of William Stanley and Julia Dorothy (Stanwick) Petersen.
He is survived by his wife, Patricia Babcock Petersen; three sons, Robert Petersen, Craig Petersen and Todd Petersen; four granddaughters, Soracha Petersen, Ellen Petersen, Kiera Petersen and Lauren Petersen; grandson, Bryan Petersen; and two sisters.
Bill served in the National Guard in 1956. He and his wife, Patricia were self-employed in the Antiques and Collectibles business. They met each other in Houston, Texas over a collection of postcards at an antique postcard convention in 1985. They were married on December 19, 1986 and were both members of the Martindale Methodist Church. Bill also worked as an audiologist at a State Hospital in Connecticut.
Private Family services.
Arrangements by Pennington Funeral Home in San Marcos.
To view and sign the guestbook, visit www.post-register.com/obituaries/Bill-Petersen