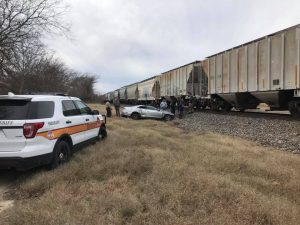 Photo courtesy of Caldwell County Office of Emergency Management
Officials investigate a crash scene at the intersection of FM 1854 and Oakwood Dr. in Dale, where a train collided with a passenger vehicle that was attempting to cross the tracks.

A Dale man was killed Thursday in his hometown when a car he was driving collided with a train, Texas Department of Public Safety officials said.
Rogelio De Lindo De Leon, 25, of Dale was pronounced dead at the scene by Pct. 4 Justice of the Peace Raymond DeLeon, according to reports.
The crash occurred at around 2 p.m. Thursday, according to a report filed by DPS troopers. According to the report, De Leon’s 2001 Honda Accord was traveling south on Easy Street in Dale when it failed to yield right of way to a Union Pacific train headed west.
The car was struck by the train and dragged 30 yards before coming to a stop, according to reports.
The crash occurred at a rural intersection of train and roadway where no automated stop arm is present.
The Caldwell County Sheriff’s Office was the first agency to respond to the scene. Caldwell County Office of Homeland Security and Emergency Management Chief Martin Ritchey commended the way first responders handled the crash at a Monday meeting of the Caldwell County Commissioners Court.
“I want to applaud the work of our first responders,” Ritchey said. “The sheriff’s office got on the scene first and was able to quickly extract the victim from the vehicle. Unfortunately, the outcome wasn’t better, but every effort was made to get the victim out of the car.”