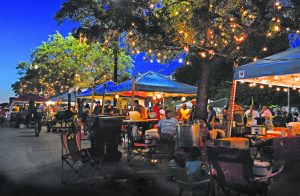 Lockhart — always famous for its bevy of barbecue joints — has made it on the national radar once again, this time getting the nod from an Expedia travel blogger as a top place to visit in 2018.
The Caldwell County seat, which ranked No. 17 on a list that also includes New Orleans, Jersey City, Kansas City, San Antonio and Richmond, Va., was touted by Expedia contributor Meredith Castin. Castin says April is a prime time to visit, noting that the nearby Old Settler’s Music Festival in Tilmon makes it a good time to sojourn to the Barbecue Capital of Texas.
“Try to plan your visit to Lockhart around April 19-22, 2018, so you can enjoy good tunes and good food, Texas style,” writes Castin, who admits that anytime is a good time to visit Lockhart and “indulge in smoked meats.”
The Jan. 4 article titled “Experiencing America’s cities when they’re at their best” was posted on viewfinder.expedia.com, a section of the site devoted to travel features.
“Expedia has an annual tradition of researching the hottest travel destinations for the new year, and we’ve created a list of 18 cities across the United States that are at their best in 2018,” Castin writes. “These winners are in no particular order, but they’ve all got serious bragging rights in the new year.”
Lockhart Economic Development Corporation director Rob Tobias said he was pleased to see the ranking as well as the mention on a presumably nationally viewed platform.
“We’ve been really trying to get the word out lately,” Tobias said. “Our partnership with San Marcos has been instrumental. People are really attracted to the cultural elements of our community.”
Tobias said the majority of the cities on the list had one thing in common.
“Cultural appeal,” he noted, adding that inquiries from companies interested in opening locations and bringing operations to Lockhart were picking up.
Tobias said he was actively exploring avenues that would help Lockhart play a role with Old Settler’s.
“We’re looking at what roles we can play,” he said. “We’re talking about getting a shuttle from our community to the (festival) site to make it easier for people to get back and forth.”
To read the rest of the list, visit viewfinder.expedia.com/features/18-cities-that-must-be-seen-in-2018.