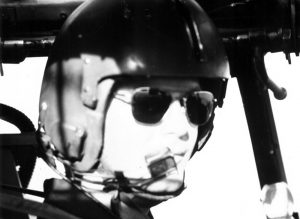 Benny Hilburn in an aircraft back in his Navy days.

By Todd Blomerth
Special to the LPR

It was early 1968, and thousands of enemy troops surrounded a fire base in South Vietnam. As his aircraft flew at low altitude dropping sensors over the area, the young naval officer knew the North Vietnamese were equipped with several types of anti-aircraft weapons. At the height his US Navy P2V Neptune was flying, rifle fire could also easily reach it. However, his biggest fear was not the enemy. The crew had just received a warning notice. B52 Stratofortresses were inbound, and soon would be directly over the battlefield. From 30,000 feet, thousands of pounds of deadly ordinance would be dropping on targets. It was time to get out of the way.
I’m getting ahead of myself, so I’ll start at the beginning.
Benny Hilburn was born in Ft. Worth, Texas in 1943. He was the son of Ben Bazzel Hilburn and Pauline (Stringer) Hilburn. Benny’s dad was manager of a Swift poultry plant, and Benny spent his first five years of life in Yoakum, Texas. The Hilburn family moved to Lockhart in 1949. It should come as no surprise that Benny was an active, fun loving kid. He was a Cub Scout, and played trombone in the high school band.

For the full story, pick up a copy of the Post-Register.