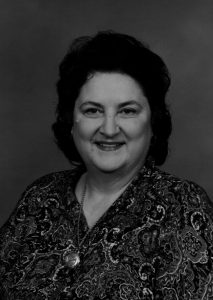 Emma Jean Schulle, 78, of Lockhart, Texas passed away on September 10, 2018. She was born to Alvin and Ella Nickel on September 21, 1939 in Luling, Texas.
Emma Jean graduated from Lockhart Schools and attended Durham Business School. She married Clarence Schulle on July 21, 1961 at the Ebenezer Lutheran Church in Maxwell. She started her career by working for the Veterans affairs Commission in Austin, Texas for 3 years; and then started raising a family and doing book keeping and typing services from home. In 1975 Emma Jean was hired by the District Clerk of Caldwell County Jean Efird. In 1978 Mrs. Efird became ill and decided not to run for the District Clerk and Emma Jean decided to run for office and won the election and became District Clerk in 1979 and remained in office until January of 2006. Emma Jean also enjoyed hunting, fishing, camping and photographing on her spare time. She taught Sunday school and worked with the ELCA Women of the Church.
She was preceded in death by her parents; sister, Ramona Nickel; brother-in-law, Chuck Pierce; niece, Sharlene Pierce and daughter-in-law, Catherine Schulle. She is survived by her husband of 57 years, Clarence Schulle; four children, David Schulle of Maxwell and his two daughters, Bobbi and Jamie; Darrell Schulle of Udall, Kansas and his three children, Amanda Butts and husband, Gerry of Cedar Creek, Travis Scott and wife, Michelle of Lockhart and Ryan Scott and wife, Shelby of Lockhart; Carol Longmire and husband, John of McMahan and their children, Caitlin of San Marcos, Ciara and Chiann of McMahan; and William Schulle and wife, Vickie of Maxwell and their children, Heather Schulle of Lockhart, Hannah, Halley and Emma Ann of Maxwell; sister, June Dell of Lewisville; brother, Russell Nickel of Lockhart and his children, Lindsay Roberts of Lockhart and Alex Nickel of Bastrop; and eight great-grandchildren.
Family will receive friends from 6 p.m. to 8 p.m. on Friday, September 14, 2018 at Eeds Funeral Home. Funeral services will be at 10:30 a.m., Saturday, September 15, 2018 at Ebenezer Lutheran Church in Maxwell. Interment to follow at Ebenezer Cemetery. Serving as pallbearers will be Bruce Germer, Keith Duesterheft, George Bohn, Jim Bohn, Travis Scott and Ryan Scott. Honorary pallbearers Jeffrey Lynn Van Horn and Gerry Butts.
In lieu of flowers donations may be made to the Alzheimer’s Association or Ebenezer Lutheran Church building fund.
Arrangements under the care and guidance of Eeds Funeral Home.
To view and sign the guestbook, visit www.post-register.com/obituaries/Emma-Jean-Schulle