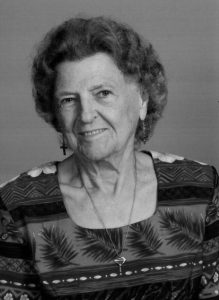 Evelyn Beyer Messer, 85, peacefully passed away on June 20, 2018 in Austin, surrounded by her loving family at their home.
She is preceded in death by her husband Merrell G Messer and her parents Agnes and Adolph Beyer. Mrs. Messer was a kind, generous and devoted loving wife and mother. She is survived by her 4 children: Beverly, James (Jackie), Nancy (Floyd) and Terrie (Jana). She also has 9 grandchildren: Jamie (Ryan), Kevin (Scarlet), Brenda (Mario), Brian, Nick (Jane), Ethan (Christen), Jett, Lauren (Scott), and Alyssa (Logan). Mrs. Messer had 9 great grandchildren: Thomas, Lucas, Faith, Christopher, Raylen, Kayleigh, Sophie, Emily and Ezra. She had 1 living sister Nita Joiner (Don) of Houston, Texas, one sister-in-law Beth Warner (Lee who is deceased) of Walla Walla, WA, along with many nieces and nephews. Mrs Messer worked in public service most of her life at Schwertner, Austin and Premont, TX Banks, as well as when in Vermont while her husband was serving in the United States Air Force.
She worked with the city of Lockhart, TX for many years before retiring. Mrs. Messer was well known for her warm heart and smile and love of family. She will be dearly missed and the family is greatly saddened by her loss. In lieu of flowers, donations may be made to the Saint Louis King of France Catholic Church of Austin, TX or charity of choice on behalf of the Messer family.
There will be a visitation held on Monday, June 25, 2018 from 5 to 8 p.m., with a rosary at 7 p.m. in the Memorial Chapel of Cook Walden Capital Parks in Pflugerville, TX. The Funeral Service will be held on Tuesday, June 26, 2018 at 10 a.m. at Saint Louis King of France Catholic Church in Austin, TX. Interment will follow at Cook Walden Capital Memorial Park Cemetery in Pflugerville, TX.
To view and sign the guestbook, visit www.post-register.com/obituaries/Evelyn-Beyer-Messer