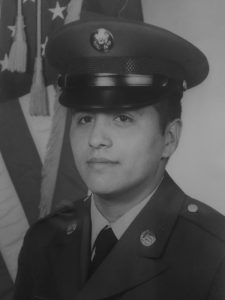 Gilbert Samuel Guerra, 61 of Lockhart, Texas went to be with his Lord, August 29, 2018.
Born February 12, 1957 in Del Rio, Texas to Gilbert and Maria Guerra he grew up in Stockton, California. He served in the United States Army before going on to study printing at Delta College and Southwest Texas State University. Gilbert began his printing career at the Del Rio News Harold. He would go on to print for the Lockhart Post-Register, The Bryan-College Station Eagle, Austin American Statesman and The Sacramento Bee. He concluded his career as a pressman at the Post-Register.
When Gilbert found his way to Lockhart in 1980, his love of cars and cruising earned him the nickname of “Low Rider”. It was during one of his daily cruises through town that he first laid eyes on the love of his life, Guadalupe Martinez. They were married October 18, 1980 and would go on to welcome twin daughters, Olivia and Lisa, and son Richard. After retirement Gilbert soon began moonlighting as a part-time handy man and ranch hand.
Gilbert never met a stranger and would always go out of his way to help anyone in need – often with a joke or tall tale thrown in. He enjoyed fishing, barbecuing and his yearly trips to California to visit family. His most fulfilling joy was becoming “Papa” to his grandson C.J.
Gilbert was preceded in death by his father Gilbert, mother Maria G. Gonzalez, sisters Olivia and Elizabeth, mother-in-law Julia Martinez, step-father Jose Gonzalez, brother-in-law Edward Guerrero and son-in-law J. Gilbert Cruz Jr.
He is survived by his wife of 37 years, Guadalupe Guerra; son Richard David; daughter Lisa Marie and son-in-law Jose Rodriguez, daughter Olivia and grandson Cristian James Cruz. Sisters Dora Guerrero, Otila Ruiz (John), Lydia Lytle and Rosa Buenrostro (Arnie). Gilbert is also survived by numerous nieces and nephews.
A memorial service is planned for Saturday, September 15, 2018 at 2 p.m. at Lockhart Church of Christ, with Bob Hailey officiating.
Arrangements under the direction of Eeds Funeral Home.
To view and sign the guestbook, visit www.post-register.com/obituaries/Gilbert-Samuel-Guerra