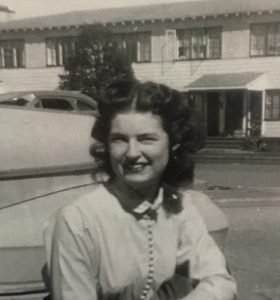 She loved Coca-Cola, Hershey’s kisses, and Justaburgers. Also, See’s Candies, potato soup, and pastrami sandwiches (so much so that our dad flew back from New York City a couple of times with pastrami sandwiches in his luggage.) No surprise about this, but she hated vegetables, and just barely tolerated fruit.
She played bridge, she loved to read, and she loved movies. All movies. When we were children, she often took us with her to films as diverse as the Tarzan movies, Prudence and the Pill, and The Haunting. She even worked at movie theatres, as the ticket taker up in the front. She enjoyed driving around the countryside (as a passenger). And loved Gulf Shores, Alabama, vacationing there at beachfront rentals.
And once she saved a cat from a dog, getting badly bitten for her heroism. By the cat. Rabies shots were tolerated with some grace.
Mrs. Maxine Rix died Monday, August 20, 2018, after a long bout with Alzheimer’s Disease. She was living at Sodalis Memory Care in Dripping Springs, but for the previous eight years she lived in Lockhart, Texas. She was 89. Her friends called her Mickey.
She graduated from Tyler High School where she was a minor tennis star, and in her young adult years was as beautiful as any of the 1950’s movie actresses. She lived most of her life in Tyler and at Hide-a-Way Lake near Lindale, Texas. Early in her married life, she resided in Torrance, California, and then Greenville, Texas. She worked as a secretary for Ling-Temco-Vought.
She is survived by her two daughters, Gretchen Rix and Roxanne Rix, of Lockhart, and her sister Mrs. Jackie Kimberley, of Tyler, Texas. Maxine was married to Henry Gene Rix (deceased) of Tyler, Texas, and was the daughter of Roy and Jahazy McMackin (also deceased) of Tyler, Texas.
Say a prayer for her peaceful sleep and sweet dreams. Donate some money to help eradicate Alzheimer’s Disease.
To view and sign the guestbook, visit www.post-register.com/obituaries/Maxine-Rix