Gomez grabs bull by the horns in new role 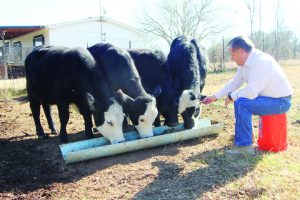 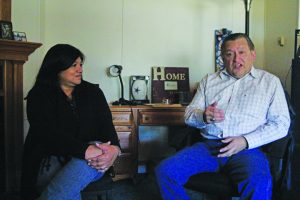 Fifteen years after founding the Lone Star Fugitive Task Force, Hector Gomez is no longer spending his days bringing criminals to justice.
The 55-year-old Gomez is no longer working for the U.S. Marshalls, having taken on a role with the Texas Office of Court Administration as its court security director, a newly created position designed to help bolster security in state courts.
But on the weekends, Gomez’s round-up skills are on display at his Caldwell County ranch, where the fugitives are merely at the other end of the pasture and surrender pretty quickly at feeding time.
“I’ve got three heifers and this bull right now,” he says as he gives the docile bovine rooting around in the trough a pat. “This is a great place for weekend getaways and family vacations.”
But to suggest the 55-year-old Gomez has retired to play rancher is … ahem … udder nonsense. The veteran lawman said he is eager to use his background in law enforcement as the state’s court security director, a position created in 2017 after the attempted assassination of state District Judge Julie Kocurek in 2015.
“It’s a good role, and I do feel like I have a purpose,” Gomez said. “My experience with the Marshalls will help me communicate with the judges.”
Gomez said he expected communicating with some of the courts to be an uphill challenge. Despite what happened to Kocurek just a few years ago, he said some judges would likely be stubborn and not see a need for extra security in their courtrooms during trials.
In other words, his early days as court security director could resemble the life of a traveling salesman as he makes his way around the state.
“I expect to spend most of 2018 on the road,” Gomez said. “I have to make sure that judges know about the possibilities that are available to them. The judges are not required to fill out any forms or commit to anything, but I have to advise them.”
If a judge is interested, Gomez’s office will conduct safety/security audits on their residences and courtrooms to look for any holes in security. Then, it’s all about making things safer.
“I’m not a career administrator,” Gomez said. “I really believe I’ll actually be able to talk to them. I think the close relationships I have with some of them will be an asset.”
The fact-finding and information gathering he expects to do this year will potentially pave the way for an effective 2019, when the next Legislative session will commence.
“I’m hoping we’ll be able to ask the legislature poignant questions about what can be done, and what we can do to help,” he said.
He said he expects to hold the position for 5 years and then see what happens next.
That could include the pursuit of a career in public office, he said.
“I would be open to running for public office if I felt strongly that the public would be better served by my decision, and would not consider concluding my state service,” Gomez said. “This is certainly an effort where ‘all the stars would have to line up.’”