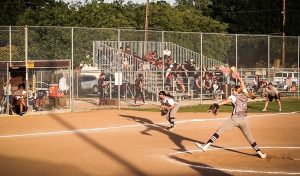 Facing a win-and-you’re-district-champion situation, the state-ranked No. 19 Lockhart Lady Lions did what they’ve done all season long.
They won – and decisively, beating Kerrville 15-0 in their final home game of the season.
Amanda White took the win, giving up two hits but striking out five batters. Alex Hedspeth went 2-for-3 with two doubles. Alyssa Barrientez went 2-for-2,
Gracie Bell went 2-for-3 with two doubles and Merina Mills also went 2-for-3.
The win came on the heels of a stellar week for the Lady Lions. Lockhart stormed Marble Falls 12-1 on the road and shut out Medina Valley 10-0 at home.
Hedspeth knocked in five hits against Marble Falls, nearly hitting for the cycle with two doubles, two singles and a triple.
Lockhart scattered 16 hits in the game and Barrientez secured the win, allowing four hits and one run over seven innings, striking out six and walking no one. Marissa Camacho, Trinity Castillo, Hedspeth and Mills each recorded multiple hits.
Earlier in the week, Amanda White and Alyssa Barrientez pitched a shutout against Medina Valley. White got the win, going 3 1/3 innings, allowing no hits and striking out three.

FOR THE WATCH: Timepieces are Lockhart jeweler’s specialty, he ...