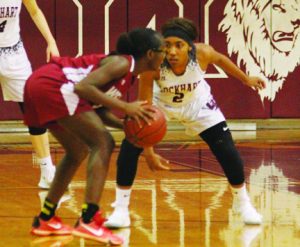 The Lockhart Lady Lions have suffered three close losses to begin district, capping their winless streak with a 39-26 road loss to Dripping Springs.
Last week, the Lady Lions suffered a couple of close losses: a 40-38 decision against Seguin in their district home opener after being tied 18-18 at the half, and a 40-38 road loss to Boerne Champion.
The losses come on the heels of a 12-0 non-district campaign where Lockhart plowed through tournament play, often steamrolling its competition. But against competition in a tough district, depth, stamina and turnovers have been factors that have not played in head coach Dennis Helms’ squad’s favor.
“Against Dripping Springs, we just turned the ball over too much,” said Helms. “We gave our opponent too much momentum instead of putting their fire out. Our offense gave them too many points.”
Helms said he thought brighter days – and district wins – were on the horizon for Lockhart, though.
“When we come to bring it, we are a good team, especially at home,” Helms said. “There were many learnable situations from individual plays in that Dropping Springs game. It will get better.”
The Lady Lions get a break from district play at the Bourne Tournament on Dec. 28-29. District play resumes on Jan. 2 against Alamo Heights.