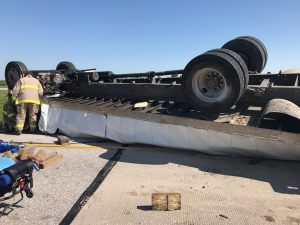 First responders investigate a crash on Saturday on SH 130 where a driver was killed and his passenger was injured when their box truck rolled over after veering off the roadway. The Texas Department of Public Safety said this week that neither driver was wearing his safety belt at the time of the crash. Photo contributed by Caldwell County Office of Emergency Management

One man was killed and other was injured on Saturday when a box truck flipped over while traveling on the SH 130 toll road.
Driver Esai Eugene Ellison, 21, of San Antonio died at the crash scene, which happened at 3:35 p.m. March 30 about 10 miles west of Luling.
The passenger, Aaron Bryant Ellison, 26, from San Antonio was transported to Dell Seton Medical Center in Austin.
According to a Texas Department of Public safety spokesperson, neither driver was wearing his seatbelt at the time of the crash.
According to the report, the box truck was a 2016 Hino 185 that was traveling south on the toll road. The Texas Department of Public Safety said the preliminary investigation revealed the driver of the vehicle had veered off the roadway to the west side bar ditch. The driver then attempted to get back onto the roadway but struck the guardrail, flipping over onto its top and crushing the cab.
The crash shut down a stretch of the roadway for more than two hours.
The investigation is still ongoing, the DPS said.