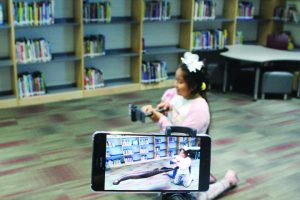 Samantha Tinoco is able to see a large sea creature swimming away through a video screen. 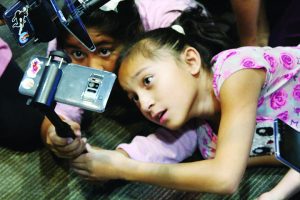 LYTTON SPRINGS — Things you ordinarily see in the library at Alma Brewer Strawn Elementary School: books.
Things you don’t usually see: dinosaurs, large mammals, the sun or other planets in the Milky Way galaxy.
So, suffice it to say, it was an extraordinary day for about 450 kindergarten-through-fifth-graders who showed up to school last Thursday and got the opportunity to try out handheld devices provided by Google.
The android-powered displays were affixed to what appeared to be similar to selfie sticks, and when looked through, the library was transformed into what amounted to a walking three-dimensional museum.
The technology used is referred to as augmented reality, which is defined as a live direct or indirect view of a physical, real-world environment that incorporates computer-generated input like sound, video or graphics.
The elements — dinosaurs, planets and the sun, to name a few – were geotagged, meaning students had to walk around the library to encounter them at specific coordinates, much like in the 2016 game “Pokemon Go,” which enjoyed immense popularity for a couple of lazy summer weeks.
Kindergarten teacher Chi Rocha spearheaded the effort to invite Google to bring the devices to Strawn for students to test.
“It’s a pioneer program,” explained Rocha, a self-professed techie. “They’re bringing it into schools to test while the app is still in beta mode. It’s giving students and teachers a chance to interact with it.”
Potentially, instructional augmented reality apps — which could conceivably be used with ordinary tablets or smartphones — could be used to give teachers a more visual, hands on way to teach lessons.
“There are eight expeditions currently available,” Rocha said. “It’s not just dinosaurs. There are planets, and forces of nature like tornadoes, earthquakes and tsunamis. One lesson the kids really seem to enjoy are the fish, too.”
Indeed, with the fish lesson, fish seem to be swimming through the air if one is to gaze through the video display.
Strawn earned the right to test the technology due in part to its proximity to Austin’s Google offices and its Title 1 status.
“More than 80 percent of the students here are on a free or reduced lunch program,” Rocha said. “It’s out of the ordinary for them to get to experience something like this.”
On Thursday, each teacher would lead the way, giving the kids a chance to look at the dinosaurs before switching to a planetary lesson. Although they seemed to be experts, the teachers themselves had only had a crash course just hours earlier, arriving at school at 7 to get some pointers from a Google representative.
The excitement in the room was palpable as the kids looked through the screens and saw dinosaurs standing in spots of the room that were, in reality, empty.
“The adults have seemed to be just as excited about it as the kids,” Rocha laughed.
Assistant Principal Adam Miller said it was his first encounter with the technology.
“I didn’t know about it until Ms. Rocha brought it up at the meeting,” Miller said. “We are absolutely lucky to have her and the chance for our students to test this out.”