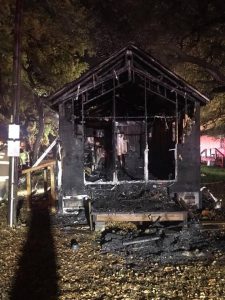 Maxwell Community VFD, Chisholm Trail Fire Rescue and Mid-County Fire Rescue-ESD No. 4 responded to a mobile home fire on FM 20 at Old Fentress Road. The cause of the fire is under investigation, but a Caldwell County spokesperson said lightning damage remains a possibility. No injuries or fatalities were reported. Storms that brought heavy rainfall and high winds swept through the area Wednesday prompted flooding in many areas, road closures and power outages. The county as of Wednesday afternoon had received several reports of damage to carports, sheds, mobile homes and other structures. No injuries had been reported as of Wednesday. Photo courtesy of Caldwell County Office of Emergency Management.